The first episode after Ugly Betty’s holiday break is called The Passion of the Betty. How fitting that title given the passion Ugly Betty fans have shown for the ABC hit that now has found a home on the network’s highly successful Wednesday night.

Ugly Betty stars Ana Ortiz and Tony Plana portray sister and father to our heroine,
Betty — and joined SheKnows for a video chat to discuss the show’s new timeslot, Ortiz’s Ugly Betty love interests
and how their move to New York has allowed the show to truly take flight. 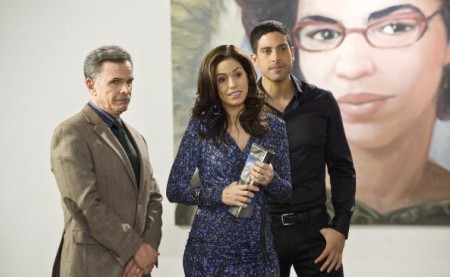 With its stellar cast, Ugly Betty has become a darling for millions of passionate viewers who follow the exploits of the young woman with stars in her eyes when it comes to how she sees
her future. In the last two seasons, Betty’s love life has gotten a makeover while the character has maintained her unique, trademark style.

Ortiz and Plana could not contain their joy in discussing a show that clearly is the most treasured work of their careers.

Along with Vanessa Williams, America Ferrera, Becki Newton, Eric Mabius, Michael Urie and
the legendary Judith Light, it is clear after speaking with Ugly Betty’s creator, Silvio Horta, the new Wednesday night comedy that has it all, also possesses a cast that’s as
close as the revered television producer has ever witnessed. “They truly love each other,” Horta told SheKnows.

Read on for more Ugly Betty

Get your weekly Ugly Betty updates!