Charlie Sheen and Brooke Mueller still can’t communicate based on a Colorado court order, but word is Mueller is looking to reconcile, in spite of having alleged that he attacked her with a knife! 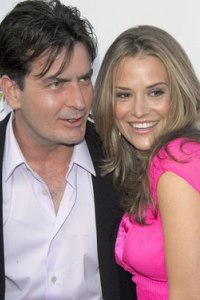 Only five days after the Christmas day quarrel that led to a 911
call and the arrest of Sheen, Mueller’s attorney filed a petition requesting that they be allowed to communicate — though she’s not
requesting the restraining order be lifted completely. No surprise, she still doesn’t want her hubby carrying a weapon, drinking alcohol and using drugs. She just wants to be able to talk to him.

The reason? Mueller, 32, wants to get back together with Sheen, 44, and word is, she’s even ready to move back in with him in Los Angeles!

Either this is another sad case of the abused woman going back for more or Mueller was exaggerating in her now infamous 911 call and the police report, both of which have her accusing him of trying
to kill her.

Today’s scheduled hearing on the request has been postponed, which means the couple still can’t talk and will have to stay apart at least until their new January 11 court date.

“She hasn’t spoken with him,” Mueller’s mom Moira Fiore confirmed to Us magazine, but she’s not sure she wants her daughter back with Sheen, admitting she has, “mixed feelings about it.”

Local prosecutors’ feelings are not mixed, however: They are completely against the request and filed a petition to keep the restraining order intact.

TMZ reports that the issue at hand is who will take responsibly for monitoring the couple if and when they move forward together, with Mueller concerned anyone sent to keep an eye on them will leak
the goods they overhear to the tabloids.

For the time being, 9-month old twins, Max and Bob, remain in Aspen with Mom and are doing fine, according to Pitkin County Department of Social Services, while Sheen was back at work for a Two and a Half Men table read today.

Sheen is also due back in court on February 8 to face charges on his arrest that may include felony menacing and assault charges and a misdemeanor count of criminal mischief. Word is the case can
move forward in spite of his wife’ request to drop the charges, but the prosecutor hasn’t filed anything as of yet.

SheKnows fears this horrifying tale is just warming up… And we thought the Tiger brouhaha was bad!

Will Denise Richards write a tell-all on Charlie Sheen?