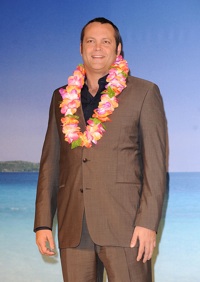 Vaughn wasn’t a wedding crasher —
this time he was the groom and wed Weber, his girlfriend of two years, at Lake Forest Academy in the Chicago suburbs.

The couple tied the knot in Vaughn’s hometown on January 2 at the Armour House on Chicago’s North Shore. The 39-year-old actor, best known for his roles in Swingers and The Wedding
Crashers, proposed to the 31-year-old real estate agent last February.

Vaughn’s previous relationship was with Jennifer Aniston, which was in turn her first serious relationship after her marriage to Brad Pitt fell apart. While Vaughn and Aniston were rumored to be engaged, neither ever confirmed it.

Vince told People back in September that he was more than ready to settle down — and even have kids! “I’ve been very fortunate in my career, and my life has been about that for so long
that you get bored of it. You’re ready for your life to be about other people and other things,” he said. “It’s the first time that I really want to have kids.”

After a turn in the ensemble comedy Couples Retreat, Vince is taking a short break to enjoy his newly married status but has five projects in development including acting as creative
producer for the upcoming Wicked Lovely, based on the popular young adult fantasy book series.