Jackie Chan is bringing his parenting skills to his next film along with a high kick or two in The Spy Next Door. SheKnows has an exclusive The Spy Next Door clip in celebration of the film’s January 15 opening nationwide. 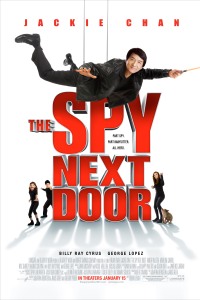 In our exclusive clip, Chan is doing his best to ward off intruders who seek to harm the family of the woman to whom he is trying to get closer. You guessed it — she lives
next door.

Chan is The Spy Next Door in this feature, and the premise of the film may allow Chan to join the next generation of great action family film stars such as Dwayne “The
Rock” Johnson. In addition, the film also shows the world how the camera utterly adores actress Amber Valletta.

Will Chan pull off the deep-cover assignment before one of Valletta’s kids figures out that he is not the real deal? That, unfortunately for Chan’s secret agent, will likely be the
toughest mission in his career.

Although Chan does live next door to Valletta and their characters’ chemistry may seem real, Chan is in fact undercover, placed in the neighborhood for unknown reasons. Valetta’s children
figure out quickly that their next door neighbor is much more than he seems.

The Spy Next Door exclusive clip

Sit back and get ready for the rollercoaster ride that is a Jackie Chan action sequence.

Later in the film, Chan is asked to babysit Valletta’s kids, and he believes he has an “in” into her world. Unfortunately, one of the children he’s watching downloads a secret
code, sending the entire family and Chan on the adventure of a lifetime.

Enter to win our free giveaway. You could win a $500 air travel gift card and $500 hotel gift card to plan the perfect
getaway.

Read on for more The spy next door

The Spy Next Door printable maze