Matthew McConaughey welcomed his second child into the world on January 3 — and it’s a girl! 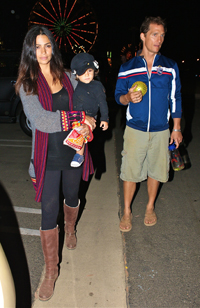 The actor, who already has a young son with partner Camila Alves, announced the new addition on his website.

“Happy New Year everybody!!!” McConaughey wrote. “On Sunday, Jan. 3rd at 12:13 am, Camila gave birth to a healthy seven-pound, seven-ounce baby girl named Vida Alves McConaughey… Vida is
Portuguese for ‘life’ and that’s what God gave us this morning… Camila’s recovering wonderfully and we are both truly honored to welcome this little lady into our family… thanks for all your
well wishes and prayers along the way. another blessed day. we give thanks. just keep livin, Matthew and Camila”

McConaughey announced the pregnancy in June the same way, on his blog.

“We pulled off the greatest miracle in the world one more time. Camila and I are expecting our second child, bringing more life into the world, making more to live for. The future looks bright as
the family grows.”

Just days before the birth, McConaughey’s mother expressed her excitement to Us Magazine. “We
have no idea when the baby is coming! The baby could come literally any minute. We are all waiting and very excited!”

Alves, a Brazilian model, met McConaughey in 2007 and gave birth to their son, Levi, in July 2008. She launched a line of handbags called Muxo.

Read on for more matthew mcconaughey

McConaughey’s comments upon learning about baby #2