Denise Richards has promised to tell the public everything Charlie Sheen ever did to her during their marriage. 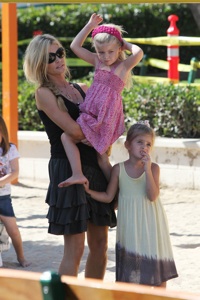 Charlie Sheen’s ex threatened to air his dirty laundry after
being accused of using her kids for a photo op in the wake of his domestic violence arrest. Denise Richards was photographed with her two daughters with Sheen, Sam, 5, and Lola, 4, at a local park.

Richards wrote on Twitter, “For all the negative nellies out there, I did not have a (expletive) photo op with my kids at a park. when there is drama u get followed more.”

“Sorry had to vent (expletive) pisses me off sometimes..one day..I will spill my guts about everything.”

During her contentious divorce from Sheen in 2006, Richards accused Sheen of heavy drug and alcohol abuse as well as threatening her with similar acts of violence as his current wife Brooke Mueller alleges.

Richards told Howard Stern earlier this year that when she and Sheen began their romance, he was in a good place. “He was three years sober and he was working and doing really, really well,” she
said. Things quickly went downhill after the marriage.

Read on for more about Charlie Sheen & Denise richards

SheKnows Celebrity Photo Blog asks what Denise will say…guess we have an answer!