Amy Winehouse went into the holidays among chatter of remarriage, but is instead having a typically rough run of it this holiday season. 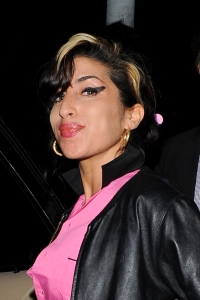 While Winehouse is clearly a talented songstress, she’s become known as much for headlines about her drug use, legal woes and turbulent marriage, and sadly, this week offered more of the same. Rumors that she was set to remarry her ex have been overshadowed by assault charges related to a scene she made at a children’s theater and now there’s word that she’s collapsed from nervous exhaustion!

The crooner who infamously croons “no, no, no” in her breakout hit Rehab actually checked herself into rehab earlier this year and was set to be doing well. With her ex hubby Blake Fielder-Civil now in rehab himself, word was the pair would remarry over the holiday season.

Before that story could catch on, however, reports spread that Winehouse heckled a production of Cinderella at Milton Keynes Theatre, just outside of London, on Saturday, December 20, shouting “He’s (expletive) behind you.”

With an audience of children on hand, front-of-house manager Richard Pound tried to quiet the oft troubled star. She allegedly responded by attacking him and kicking him in the groin. Needless to say, this had folks wondering about her newfound sobriety.

Winehouse turned herself into the Thames Valley Police on December 23 and was charged with a “public order offense and common assault,” under the name Amy Civil. Released on bail, she’s set to return to court on January 20. (This is her second assault charge this year, though she was acquitted on charges for hitting a female fan back in March.)

Yesterday news broke that Winehouse collapsed at home due to nervous exhaustion.

“She’s been told to keep a low profile and fully recuperate,” a source tells the UK’s Daily Mirror. “She has been feeling very ill of late and had a funny turn at home. She is quite unwell and exhausted over recent events, but is soldiering on.”

The source goes on to deny a slip back to drug use or excessive drinking, pointing instead to a serious chest infection and the stress of recent events.

Winehouse first gained notoriety in The States with her second album, Back to Black, back in 2006, but the drama surrounding her since has slowed her much anticipated third venture.

“Her new songs are amazing, but will be on the back burner until she feels better,” says the Daily Mirror source.

Read on for more Amy Winehouse