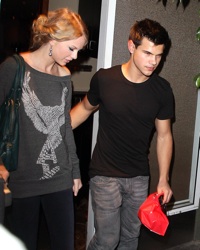 After three months of dating, Swift and Lautner, the cutest couple in the world have called it quits because boy Taylor
gave girl Taylor a major case of the yawns.

A source close to Swift told Us Magazine, “It wasn’t really developing into anything, and wasn’t going to, so they decided they were better as friends. There was no chemistry.”

“He liked her more than she liked him,” the source said. “He went everywhere he could to see her, but she didn’t travel much to see him.”

The couple met on the set of the upcoming flick Valentine’s Day, where they have small but hilarious roles as a couple in the throes of their high school romance. They first took their
romance public when Swift gave Lautner a hug at her October 9 concert, and were later seen on several very wholesome dates, including being
chaperoned by Swift’s mother while chowing down on Fro-Yo in LA.

Perhaps their age difference had something to do with it. Swift is 20, Lautner is 17, and we all know how much faster girls mature than boys, right?