Glee’s season one debuts on DVD December 29 and we’ve got an exclusive clip from the home video release. Glee has quickly become a cultural phenomenon in the classic “Must-See-TV” realm. 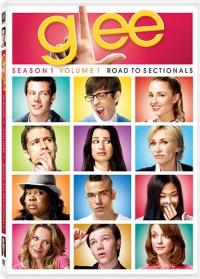 Glee Season 1: Road to Sectionals lands in stores and online and immediately illustrates why Glee is one of the best new shows to
debut in the last five years.

Glee is a magical combination of drama, comedy, musical — coupled with old-fashioned teenage angst. The students and teachers of William McKinley High School in Ohio have become
energized by the reemergence of the school’s Glee Club.

Led by the school’s Spanish teacher (the ever-charming Matthew Morrison), the Glee Club has split the school into two sides — pro-Glee and anti-Glee.

The latter is led by the cheerleading coach played with sensational panache by Jane Lynch. She seeks to destroy the newly formed Glee Club to restore the money taken from her “Cheer-ios”
budget in order to start the Glee Club.

As the singers attract the attention of a few football team players and cheerleaders, Lynch’s character sees their joining as a means of having an inside view into the Glee Club world in
order to destroy it.

Only problem is the cheerleaders and footballers are overcome with the joy of singing and eventually resist her Darth Vader ways. Lynch’s cheer coach must then resort to other unsavory means
to bring down Glee Club. Did we mention how fabulous Jane Lynch is in Glee?

Glee is from the creator of Nip/Tuck and how that show pushes the envelope so does Glee in a completely different way. Who would have thought that a show about students
of a Midwest high school who break into song would take on the cultural phenomenon that it has in 2009?

Routinely in the days following a Glee airing, many of the top 10 downloads on iTunes were the very songs from the previously aired Glee. When they performed Don’t
Stop Believin’ in a May 2009 preview showing on Fox, the video of the song became a YouTube sensation.

With the arrival of the Glee Season 1: Road to Sectionals DVD, those instant classic songs are yours forever.