Jude Law and Sienna Miller have reignited their romance. 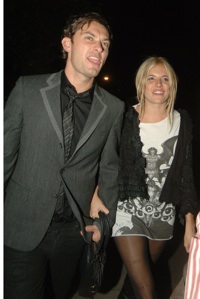 Law, who recently became a
father for the fourth time to an illegitimate child he has yet to see after an
ill-timed one night stand, and Miller, a notorious home-wrecker, took off to Barbados together after meeting up in New York where they are both working.

Law and Miller spent the holidays in the tropics. Law usually spends Christmas with his three children by ex-wife Sadie Frost in England, but has instead flown the kids — minus baby number four —
down to the beach. Miller and Law’s extramarital fling in 2004 on the set of Alfie ended his marriage to Frost.

The duplicitous pair later became engaged, but broke it off in 2006 when Miller caught Law slipping it to the nanny. Miller was later attached to a very married Balthazar Getty, and the two carried on a very public affair while Getty’s wife (by far the wealthier of the two) still quietly plots
her revenge.

Law’s family is livid over the reunion. A source told The Sun, “They have made it abundantly clear he doesn’t have their blessing. They want him to be happy but think the two of them
together is a recipe for disaster.

“They believe the relationship was a rollercoaster the last time and they were left to pick up the pieces when it finished.”

The couple was spotted cavorting on the Barbados beach with Jude’s first three kids and, hopefully, no nanny this time.