The wife of Charlie Sheen accused him of holding a knife to her throat and threatening to kill her. 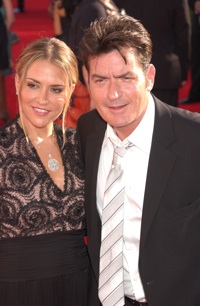 According to a sworn statement by the Aspen police arresting officer, Brooke Mueller said this wasn’t the first time Charlie went after her — and that this time he held a knife to her throat and threatened to have her killed if she told anyone.

Officer Rick Magnuson said when he responded to Mueller’s 911 call he did not notice “any obvious injuries” on the mother of twins. Magnuson took Sheen into the basement to chat, where Sheen told the officer Mueller “abuses alcohol” and that the couple have been having marital problems.

Sheen advised Magnuson that Mueller picked a fight with him at 3:30 AM, which escalated when she threatened to divorce him and take the kids. What started the fight? Sheen says it happened when he “shared a song for his daughter whom he fathered with another woman,” making Mueller jealous.

Sheen admitted that he and Mueller slapped each other on the arm during the argument, but denied pushing or striking his wife. He admitted breaking Mueller’s eyeglasses. He also denied threatening Mueller with a knife or strangling her.

According to the affidavit, Sheen told the officer he had a knife like Brooke described in his bag, which Magnuson retrieved.

When Mueller was interviewed, she told another officer Sheen became enraged when she mentioned divorce, grabbing her by the throat and straddling her on the bed. Mueller claims Sheen then held a knife to her throat saying, “You better be in fear. If you tell anybody, I’ll kill you.”

Mueller claims Sheen then told her, “Your mother’s money means nothing. I have ex-police I can hire who know how to get the job done and they won’t leave any trace.”

Magnuson says he then saw the marks on Mueller’s neck — previously unseen — and placed Sheen under arrest.

The 911 call was made at 8:34 in the morning — and Mueller had a blood alcohol level of 0.13, nearly twice the legal limit. Mueller recanted her story later at the police station, and has told cops she will no longer cooperate with them. Sheen was released on $8500 bail and has not yet been charged, pending his next court date in February.