The New York apartment of Jon Gosselin was ransacked and vandalized over the weekend! 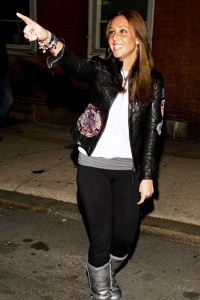 When Jon returned to his swanky
New York City bachelor pad after spending the holiday with his kids, he found the
apartment was a mess — the television was missing and clothes, rugs, curtains and pillows were sliced up. There was even a note stuck to the dresser with a knife calling Jon a cheater!

The note was signed with Hailey Glassman’s name — Jon’s former girlfriend and the daughter of Kate Gosselin’s tummy tuck doctor. Jon and Hailey reportedly broke up in October, but Hailey just
moved her stuff out of the apartment they leased together on December 23.

Why would Hailey do such a thing? Beyond being ticked that Jon was cheating on her with multiple women (seriously, who would sleep with this guy?) she was also upset that Jon was pocketing her cash
and not using it to pay the rent like he was supposed to be doing.

Jon’s lawyer says there’s no doubt Hailey is behind the stunt. “Hailey Glassman is going to jail. It’s a simple as that. The building security tape will not lie and the evidence will speak for
itself.”

But Hailey’s lawyer begs to differ. “It appears to be a huge publicity stunt. The police investigation is still ongoing and we are sure the
investigation will reveal that someone is trying to frame Hailey. There are no charges against Hailey. I don’t think they are even considering her as a suspect in a crime. It appears that somebody,
and I don’t know who that might be, or what their motive might be, is framing her. The detectives are still working on it.”

So the question remains: Did Hailey do it, or did Jon set her up for publicity?

Jon Gosselin and his mantrums