For New Year’s Eve 2010, it seems New York and Las Vegas are the place to be, but if you can’t make the scene live — there’s a host of New Year’s Eve parties happening right on your TV. Performances across the dial include The Black Eyed Peas, Green Day and a hefty selection of American Idol alums.

SheKnows has the lowdown on what’s airing where and who will show up at the parties. While CBS and MTV aren’t hosting any big events this year, there’s fun to be had all over the dial: 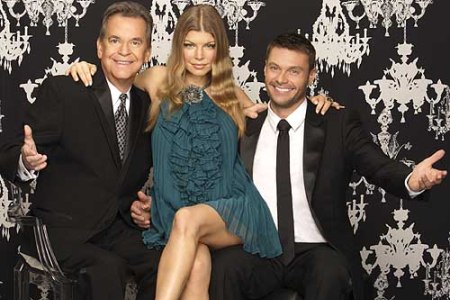 This show first aired back in 1972 and Dick Clark is back for another New Year’s Rockin’ Eve, along with co-hosts Ryan Seacrest and Fergie of The
Black Eyed Peas. The party is actually happening in two places, with Jennifer Lopez and Daughtry taking the stage in Times Square, where the proverbial ball is set to drop; while The Black Eyed
Peas, Selena Gomez, Justin Bieber, Keri Hilson, Colbie Caillat, Orianthi and Robin Thicke get the party going in Las Vegas. Good Morning America special correspondent and newlywed Melissa
Rycroft will also be on hand to report the haps in and around Time Square.

Carson Daly is also getting in on the Time Square action, with help from correspondents Natalie Morales and Allison Stewart. Green Day, Jay-Z, Rihanna are set to perform, as is the cast of the Broadway musical, Hair.

Carmen Electra plays host for a Mandalay Bay beach party in Las Vegas, with Eva Longoria and Kim Kardashian set to make appearances.
Performances from American Idol Season Eight winner Kris Allen and finalist Allison Iraheta and music sensation Sean Kingston will
take place in Vegas, but the special will also keep an eye on the action in Times Square, highlight memorable moments from past Billboard Music Awards and count down 2009’s Top 5 in music, movies
and television. 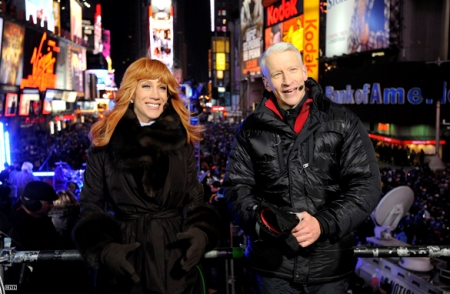 Anderson Cooper and Kathy Griffin are back at it again this year, but this special covers the map. ‘N Sync alum Lance Bass will follow the action at Planet Hollywood in Las Vegas, while CNN
familiars Don Lemon, Poppy Harlow, Gary Tuchman, Ed Henry and John Zarrella offer coverage of Times Square, New York City’s annual Midnight Run in Central Park, Honolulu (where our president will
be) and Key West, Florida.

Red Bull: New Year. No Limits, around 11 pm on ESPN

Adrenaline junky’s will want to tune in for a while ride with Rhys Millen, Robbie Maddison and Travis Pastrana. There’s no ball drop, but Patrana, who can brag of four consecutive Rally America
championships, nine X Games gold medals, the first double backflip on a motorcycle and a hit television series, is set to do the first ever ramp-to-ramp car jump over water in Long Beach.

If classical is more your scene, check out the New York Philharmonic New Year’s Eve Concert with Thomas Hampson. Check local listings with your community’s PBS station for times.