When you live in New York City, some things never change. Frank Sinatra sang about it decades ago in New York, New York and Manhattanites nod in agreement knowing that if you can make it here, we can truly make it anywhere. Now, Jay Z and Alicia Keys have us singing The City’s praises once again in Empire State of Mind. 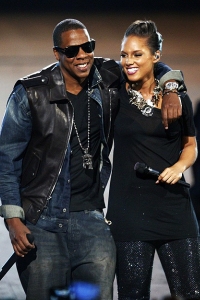 Well, friends,
ole’ Blue Eyes wasn’t lying. This is the place where you make you mark and want to wake up in the city that doesn’t sleep to find that you’re king of the hill, on top of the
heap!

With all due respect to the late Sinatra, there’s a hip tune with the same that we simply can’t shake. Nor would we want to. New Yorkers, Carrie Bradshaw included, are rocking out to
streets which make you feel brand new.

Enter Jay-Z and Alicia Keys new official anthem, Empire State of Mind. Everywhere you turn you’ll hear it and we wouldn’t
have it any other way! As you walk across town from downtown or uptown, someone is bound to crank up the volume on their car stereo and of course, you can’t help but start singing along
yourself. Next up? It puts a little strut in your step, a dance in your stride. And why wouldn’t it?

“Concrete jungle where dreams are made of,

There’s nothing you can’t do,

These streets will make you feel brand new,

The lights will inspire you,

Here’s the thing: it’s no surprise Empire State of Mind is the first thing you hear in the Sex and the City
2 trailer. The song is hip, it’s now, it’s vogue and oh-so-spot on. It’s no surprise our SATC gal pals who reinvent themselves and their relationships
would rock out to it. Similar to how art imitates life, it’s no surprise the city’s anthem has leg power and has no signs of fading.

This song is not only a song, it’s truly a state of mind. It embodies strength, spirit and a certain grittiness for being resilient. As a New Yorker you can’t help but find solace in
knowing there is nothing you can’t do — there are amazing adventures just waiting to be explored and incredibly talented people just waiting to be met.

I, for one, got the chills when I heard Jay-Z and Alicia Keys performing this at Yankee Stadium during the World Series.

Ask any New Yorker and they’re bound to have a treasured continually building memory of this song. Whether it was playing at a friend’s birthday party, uplifted their spirits
after a bad day or like me, rocked out to it at Yankee Stadium, Empire State of Mind leaves us singing, “Yes! This is my New York!”

Alicia Keys and Jay-Z’s song has taken centerfield and center stage in the biggest city in the world. It’s one of those tunes New Yorkers in particular simply don’t get sick of,
nor would we ever want it to face into the sunset over the skyscrapers which kiss the sky. Let’s hear it for New York, New York, New York!

Simply because we at SheKnows cannot get enough of this New York anthem.

Jay Z and Alicia Keys: both earn nominations for Grammys