Nancy Meyers and Meryl Streep have struck a chord in It’s Complicated. The film is a romantic comedy, but serves as so much more.

Meyers is the writer behind the Father of the Bride movies and The Parent Trap as well as the writer-director behind What Women Want and The Holiday. What
she achieves with Streep, Alec Baldwin and Steve Martin is a love triangle that Hollywood rarely sees — people over 50! The film also manages to throw so many laughs-per-minute
that It’s Complicated could easily qualify as one of 2009’s best comedies without its
fantastic romantic flair. 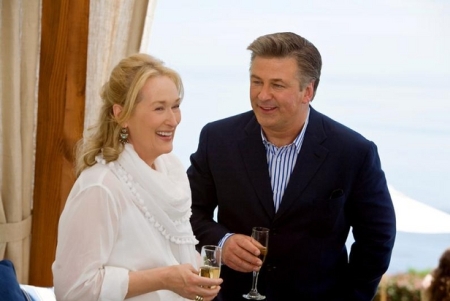 Streep, yet again in 2009, proves she is the best actress on the planet. Her performance in Julie and Julia will surely earn on Oscar nomination, yet it is her softer, vulnerable and
solidly comedic performance as Jane in It’s Complicated, the divorced mother of three, that illustrates why Streep may be to acting what Einstein was to science, Monet was to
painting and Shakespeare was to writing.

While simultaneously serving as a master of late of romantic comedy character development and directing with a soft enough hand to allow her actors to blind us with their talent, Meyers has
achieved movie theater nirvana. She culls performances out of her cast that go down as some of the most honest of their collective careers. Can you imagine What Women Want without Mel
Gibson? What about The Holiday without Jude Law and yes, even Jack Black.

In It’s Complicated, Streep and Meyers to an extent (as she told us in our exclusive interview, many of her main female characters are an extension of herself) embody the modern
woman who have lived but are now ready to live — albeit for a moment — for themselves for once.

In Meyer’s most recent romantic comedy, Streep’s single woman has spent the last ten years raising her kids after her husband left her to marry a much younger
woman. Suddenly, Streep’s character finds herself having an affair with her ex-husband. Like the title says, It’s Complicated.

How perfect is the film’s title and how unbelievable is it that a romantic comedy has never taken this name before. Streep, Baldwin and Martin (as the new love interest of
Streep) achieve movie magic. This trio are playing roles in a scenario that more often than not of late, describes many relationships we know.

Who hasn’t had a relationship where the end of the description ends with…It’s Complicated?

Meyers, in It’s Complicated, manages to capture that elusive romantic comedic aspect better than anyone producing a romantic comedy in 2009.