The First Family jetted to Hawaii for Christmas as the White House is covered in snow. The Obama’s first holiday season in the oval office was a whirlwind. First, there was the lighting of the National Christmas Tree which included hosting more than 50,000 people for 27 parties and open houses. The First Lady Michelle Obama, Malia, Sasha and even the family dog, Bo, also delivered cookies to the Children’s National Medical Center.

One notably absent item on the Obamas schedule this holiday season is a visit to Christmas Eve church services. The First Family resigned their membership with the Trinity United Church of Christ
in Chicago in 2008 after President Obama renounced the controversial pastor, Jeremiah Wright. 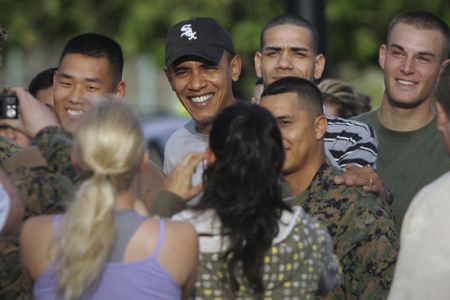 The First Family was going to find a local church after they moved to the nation’s capital however as one may imagine, going to regular services would displace regular worshippers and include
security measures like the Secret Service. According to reports, First Lady Michelle and President Obama have yet to find a place to worship in
their new environs.

The Obamas have been known to attend Sunday services in Washington, DC three times this past year. One time at the 19th Street Baptist Church and twice at St. Episcopal Church across Lafayette
Square from the White House. The press secretary indicated earlier this week that the president has regularly attended a church at Camp David.

The Camp David church, Evergreen Chapel, is a non-denominational church which holds services every week to almost 400 military personnel and staff at Camp David and their families. Although
the Bush family spent eight consecutive Christmas holidays at Camp David, the Obamas are continuing their Christmas tradition of going to Hawaii where the president grew up.

They have gone there almost every year since Sasha and Malia were born.