The Back-up Plan starring Jennifer Lopez has premiered its trailer and we have the preview along with a chance to win the film’s movie poster! The Back-up Plan opens nationally April 16, 2010 so, until then, sit back and enjoy a SheKnows First Look. 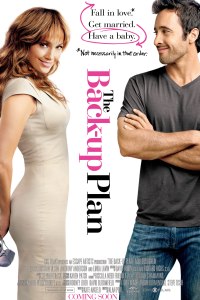 In The Back-up Plan, Lopez portrays Zoe, who after years of dating, decides to utilize her Back-up Plan of having a child solo because she’s tired of waiting.

Within hours of her artificial insemination appointment, Zoe meets Stan (Alex O’Loughlin) — a man that gives her a special feeling.

Can Lopez’s Zoe enjoy her building relationship with Stan while trying to hide the early signs of her pregnancy? Needless to say, a comedy of errors ensues. What are initial mixed signals for O’Loughlin’s Stan wind up being even more clues that he may be the right guy for Zoe.

Lopez is currently enjoying some music success with the release of her single Louboutins and SheKnows is thrilled to also see her returning to the silver screen in the romantic comedy genre that she is so successful.

Now that you’ve seen the trailer, here’s a little trivia question for you! Alex shows up a Jennifer’s door with a book titled What to Expect and food from what famous New York hot dog restaurant?

For a chance to win a one sheet poster from The Back-up Plan, put your answer on the wall of the film’s Facebook page, www.facebook.com/TheBackupPlan.

Sweepstakes rules here. No purchase necessary. Sweepstakes is open to residents of the United States who are 18 and over. Sweepstakes begins on December 23rd, 2009 and ends on January 4, 2010. See Official Rules for details. Grand prize is a one-sheet theatrical poster of The Back-up Plan (estimated retail value of $10). Odds of winning depend on number of entries received. CBS Films Inc. is the sponsor of this sweepstakes.