Alvin and the Chipmunks: The Squeakquel premieres December 23! This time out, the Chipmunks are facing down a new school, new sitters and three hot chippies played by Anna Faris, Amy Poehler and Christina Applegate. 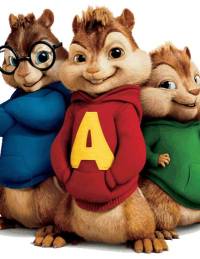 That might not be so bad, but the trio is also enrolled in high school, where they can’t seem to find their footing among the humans, including big men on campus Ryan (Kevin Schmidt of The Young and the Restless) and Xander (High School Musical alum Chris Warren).

While trying to fit in, the trio learns their new school’s music department is in trouble and decides to enter a contest to save the day. Piece of cake for these superstars, right? Wrong! The ‘Munks may have a way with the ladies, but they’ll have their hands full with the newest competition, the Chipettes.

The 2007 Chipmunk flick brought in $350 million worldwide and while the reviews haven’t been too exciting, Fox has high hopes for this one, too.

Here’s a sneak peak at what you can expect via a trailer of Alvin and the Chipmunks: The Squeakquel.