Richard Heene has been sentenced to jail time and received a huge fine for his role in the Balloon Boy hoax.

The Larimer County District Attorney’s Office sent Richard and Mayumi Heene a bill for $42,000 to cover the cost of police, National Guard
and Federal Aviation Administration expenses. The Heene’s sent these agencies scrambling when they reported their six-year-old son Falcon had floated away in a homemade metallic hot air balloon. 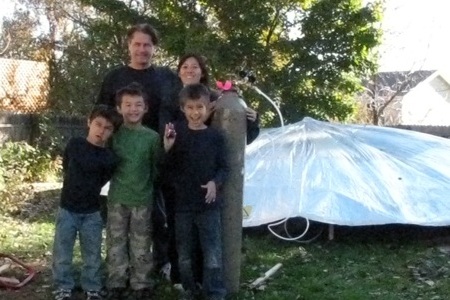 Richard Heene, who reportedly cooked up the scheme in a bid to land himself a reality show, was sentenced to 90 days in jail and four years probation. He is allowed to spend 60 of those 90 days in
a work-release program. Heene is not allowed to profit from the Balloon Boy hoax in any way during his four year probationary period.

Mayumi Heene, Richard’s wife and mother of the couple’s three sons, was sentenced to 20 days in jail. Richard will begin his sentence on January 11, 2010; Mayumi will serve hers immediately
afterward.

Both Heene parents pled guilty to their respective charges: Richard a felony, and Nayumi a misdemeanor.

Baby Hold looks at Balloon Boy and the hoax