There were fears Avatar’s high hopes would be buried under the East Coast snow storms, but according to Fox, James Cameron’s much hyped 3-D film brought in $77.3 million domestically and $159.2 million overseas — that’s almost $237 million worldwide!

This makes the Sigourney Weaver and Zoe Saldana starring Avatar the biggest global non sequel debut movie release and the biggest December opening in history, though it barely beats
out the previous holder Will Smith’s I am Legend. 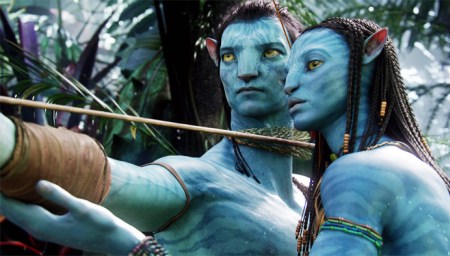 Word is, the high tech flick cost around $430 million to make and market, but with word of mouth in high gear and China and Japan not yet opening the film, Fox has high hopes. Add a serious
merchandising effort, and Avatar expects to recoup what Fox spent and then some.

Then again, this holiday weekend offers some serious competition at the box office, including Guy Ritchie’s Sherlock Holmes, starring Robert Downey Jr and Jude Law; the Meryl Streep-Alec
Baldwin comedy It’s Complicated; and Alvin and the Chipmunks: The Squeakquel.

Meanwhile, with the arrival of Avatar this December 18, The Princess and the Frog dropped to number two, with $12.2 million,
with The Blind Side bumped to third with $10 million; while the Hugh Grant and Sarah Jessica Parker vehicle Did You Hear About the
Morgans? came in fourth with only $7 million — ouch! The Twilight Saga: New Moon barely keeps a spot in the top five with $4.3 million.

As a side note, Rob Marshall’s musical bonanza Nine opened in only four theaters to bring in $247,000, giving the star studded movie
the highest per-screen average this weekend.

At the Avatar blue carpet premiere