In Did You Hear About the Morgans?, Sarah Jessica Parker and Hugh Grant play a married couple knocking on divorce’s door. As the two are about to say the word “divorce,” Parker and Grant witness a mafia murder and are rushed into the Witness Relocation Program in Wyoming. Did we mention they’re classic New Yorkers? 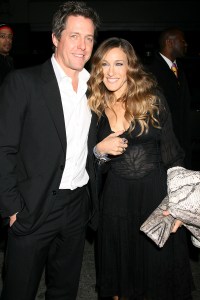 Grant believes that Did You Hear About the Morgans? will resonate with audiences across the board
beyond those who adore romantic comedies. “Number one, I hope they find it funny,” Grant said.

The Marc Lawrence written and directed capturing of the meaning of wedded bliss in 2009 proved a no-brainer decision to participate in his third Lawrence film after 2007’s Music and
Lyrics and 2002’s Two Weeks Notice starring Sandra Bullock.

“[Did You Hear About the Morgans?] is also about a marriage. It’s about love. It’s quite moving. Test screenings in America — people have been quite moved by the end (of
the film). I hope that will fly all over the world.”

Parker loved the idea of the Did You Hear About the Morgans? storyline and
also professionally hooking up with Grant. Surely, starring with the Englishman meant a London premiere — something she never skies away from. After all, Sex and the City premiered there
in 2007.

“I feel very lucky and feel very welcomed,” Parker said of the UK welcome. “People here are always so welcoming and kind.
I love London. With or without the crowd, I love London.”

Speaking of journeys, Parker as a legendary New Yorker could effortlessly identify with her character’s sudden and shocking change of locale. “Her name is Meryl Morgan and she was
happily married for 10 years, who over the course of their marriage, wandered and they are now estranged,” Parker said.

Grant seeks reconciliation and plans a dinner. “He is rightly trying to court her back into the marriage. After dinner walking down the street, they witness a murder and thrown into the
witness protection program into the wilderness of Wyoming.” 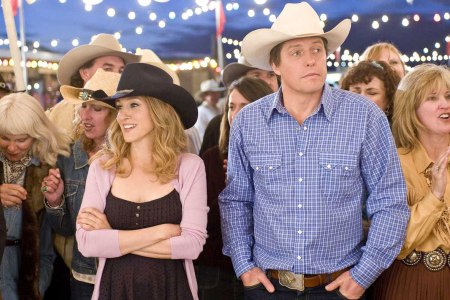 For filming, the wilds of Wyoming were doubled by the vast landscape of New Mexico, an excursion Parker enjoyed. “We were in Santa Fe, New Mexico, which was beautiful. I love traveling seeing
differing places and seeing different cultures,” she said. Parker treasured traveling, although returning home to husband Matthew Broderick and her three children, is always what life is all
about. “It was a nice experience. But, then I get to go home (to New York)!” 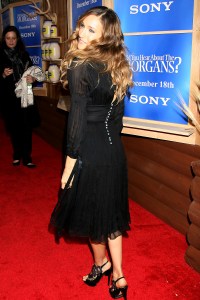 Parker’s challenges in Did You Heard About the Morgans? went beyond the acting demands of finding a
character. “I had to milk a cow which I did very unsuccessfully. I rode a horse very unsuccessfully — all for the love of the movie,” Parker said and laughed.

“I shot a gun — unhappily — and unsuccessfully. Ran in the desert for what seemed like weeks at the request of Marc Lawrence (director) and I was happy to do so. I would do anything Marc
wanted me to do.”

Another plus in the formula of making Did You Hear About the Morgans? beyond traveling to America’s heartland was playing with Grant. “It was fun and hard work. I was thrilled
to spend 16 to 18 hours a day with Hugh Grant. Every time I had to kiss him or hug him I’d tell him I’m doing it for America,” Parker said and laughed. “He’s
courageous, so easy to like. He spent three days telling us how scared he was of Bart the Bear. At the end of the day he was as close as you can be with a grizzly bear.”

What Parker is referring to is Grant’s sure-to-be classic scene across a bear who is an acting legend. “It was terrifying. I’m not accustomed to animals of any kind,” Grant
joked. “I had to do this scene with an enormous grizzly bear, but as it turns out, this bear has done hundreds of films and is more interested in acting and how it looks on camera than on eating
people.”

Although one would think after a successful shared cinematic history, Grant and Parker would have shared screen time. Not so, and Grant jumped at the opportunity. “Sarah and I worked together
very well with our little group,” he said and laughed. Grant is speaking of his frequent collaborator and Did You Hear About the Morgans? director, Lawrence. “They got along a little
too well. Mark seemed to prefer her to me because she’s another New Yorker like him — where the great pizza it’s and all about Zabar’s!” 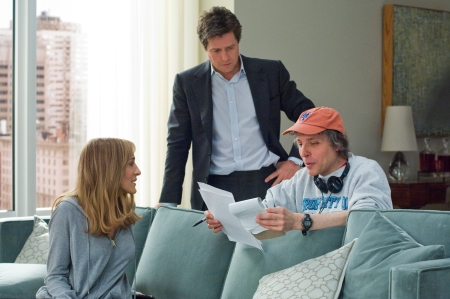 Grant is kidding, he and Parker truly gelled and do not be surprised to see the two performing opposite each other once again. “We really fell in love with each other. She’s one of my
favorite people, “Grant added.

In the end, the actress chose to be part of the film because of its message. “It’s about love and figuring out it’s complications and being with the people you want to be with and
perhaps learning to trust again,” Parker said.