Who is Hollywood’s favorite “it” powerhouse? Why yes, that would be Sarah Jessica Parker. Known most for her role as Carrie from Sex and the City, lest us not forget this actress and producer can channel a variety of characters including Meryl Morgan in a flick about an estranged New York couple relocating as part of a witness protection program in Have You Heard About the Morgans? 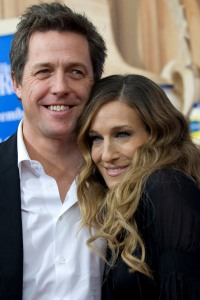 In real life, Sarah Jessica Parker is looking forward to the holidays as her baby twin girls, Marion and Tabitha
will celebrate their very first holiday season. She said, “I bought dolls for the first time in my life, it was very exciting.”

As Parker promoted her new movie in London, she dished about working with Hugh Grant on this romantic comedy. In fact, in one scene of the
movie Grant’s character gives her character a CD of New York noises so she can actually sleep.

She told the Associate Press, “I have a problem with too much quiet — from the time I was a little girl, I think partially because I’m one of eight kids. It was always just chaos in my
house. I always remember noise and for me, it’s honestly like a lullaby — the sound of sirens and taxis honking and people honestly screaming at each other, which we hear all the time. I love
that.”

In addition to the noises of New York (not to mention reprising her role as the quintessential New York fashionista, Carrie Bradshaw in the Sex
and the City sequel making a splash into theaters this May), Sarah says she can’t wait to get their house ready for the holidays.

“We’re going to buy our tree on the 19th. It will stand naked until Christmas Eve, and we’ll put the children to bed and we’ll decorate the tree when the children are in bed. We’ll leave
cookies and milk for Santa, and oats for the reindeer, and wake up Christmas morning and they’ll start ripping through presents.”

Read on for more celebrity and entertainment news