Anne Hathaway’s breakout role may have been the Princess Diaries though some credit her with breaking loose in The Devil Wears Prada. Regardless, she’s in the headlines again courtesy of a paparazzo who crashed his bicycle into her car. 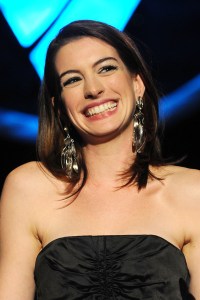 Luckily, no one was seriously injured. According to the Los Angeles County sheriff’s office, an unidentified cyclist ran into Hathaway’s car on Wednesday when the car made a right hand turn.

Anne Hathaway was not driving her black Audi; she was a passenger as her boyfriend, Adam Shulman was driving. The investigation concluded that the bicyclist was a paparazzo because he was not only driving the bike but also carrying a camera with a long lens. Witnesses on the scene told officials that the paparazzo was traveling fast although the crash likely could have been avoided. No arrests have been made.

Anne Hathaway’s personal life manages to stay out of the limelight except for her ex-boyfriend, Raffaello Follier who was charged with a dozen counts of federal wire fraud conspiracy and money laundering. Their relationship ended in the summer of 2008.

Considering Anne Hathaway commanded a salary of $5 million per flick for Bride Wars and Get Smart, there’s no surprise she’s Hollywood’s rising star. As for some of her upcoming roles, she’ll appear as The White Queen in Alice in Wonderland. Among several other roles, she’ll channel her best Judy Garland in Get Happy: The Life of Judy Garland. You may recall she sang during last year’s Academy Awards ceremony. Apparently her singing talents got noticed courtesy of that spectacular appearance and it was a no brainer casting her in that role.