Jon and Kate Gosselin will not be celebrating the holidays as a family: the couple’s divorce has been finalized. 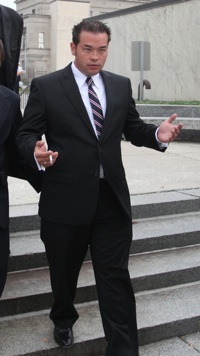 After ten years
of marriage, eight kids and a successful television show, the couple is left with a division of property heavily in Kate’s favor: she gets the large family home in Pennsylvania and primary custody
of all eight kids.

“Our client will continue to reside with all eight of her children in the former marital home,” said Kate’s lawyer Mark Momjian.

Kate said, “I am very relieved that our divorce has been finalized, and I look forward to the new year, focusing on the children. This has been a challenging transition for all of us.”

Jon got saddled with huge child support payments that he has no way of making since TLC shut down his ability to take any jobs without their
permission, per the contract he signed with the network.

Feeling bad for Jon? Don’t. He and Kate worked out the custody agreement themselves, and he knew full well that by giving up primary custody he would be responsible for more child support.

In addition, he was the party who made the choice to shut down production of the show that gave him his only source of income. Need more?

He also made the choice to break his contract with TLC by taking money for appearances without their permission, making him the subject of a major lawsuit — which, in the end, will mean even less
money will go to his kids.

Jon was docked $235,000 from his piece of the divorce’s financial settlement — every penny he took from the family’s account earlier this
year.

A rep for Jon told TMZ, “While the arbitration proceedings are still a work in progress, Jon and Kate will remain binded in their commitment to their eight wonderful children. Jon is
confident that he and Kate will be able to move forward in a fashion that will be in the best interest of the Gosselin family.”

Read on for more Gosselin news