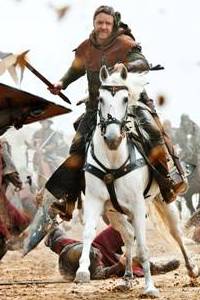 Robin Hood is an age old story that has been tackled as a comedy and a child’s tale, but the newest version coming to theaters promises to be an epic action adventure from the men behind
Gladiator, A Good Year and Body of Lies.

The Scott, producer Brian Grazer and Crowe starring film, due out in 2010, tells the tale of an expert archer set on self-preservation who becomes an unlikely hero.

After he falls for Lady Marion (Blanchett), Robin (Crowe) aims to prove his worth and
pulls together a lethal team of mercenaries who steal from the rich to give to the poor of Nottingham — which has been besieged by in infamously corrupt sheriff.

As this well known tale escalates, Robin finds himself at the head of a crusade to keep 13th century England from slipping into a bloody civil war and SheKnows is quite sure he’ll save the day!

Other familiar faces in the film are William Hurt, Mark Strong, Mark Addy, Oscar Isaac, Max von Sydow and Scott Grimes, and one look at the new trailer proves this is particular Robin Hood
wouldn’t appreciate jokes about his tights!

Cate Blanchett is one of our Top 20 Green Celebrities