A man who has been stalking actress Jennifer Garner since 2002 has been arrested for violating a restraining order. 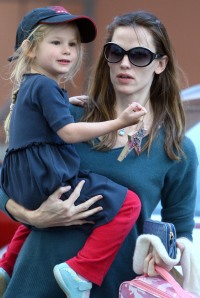 Thirty-seven-year-old Steven Burky was arrested outside of the Santa Monica nursery school attended by Garner’s oldest
daughter, Violet Affleck. Garner said Burky has been stalking her since 2002 and was granted a restraining order against him in November 2008.

Burky has been charged with felony stalking and violating a restraining order. At his Thursday arraignment he pleaded not guilty and was ordered held on $300,000 bail.

In addition, according to District Attorney spokesperson Jane Robison, a judge ordered Burky to stay 500 feet away from Garner and her family if he is released on bail.

In a declaration to the court, Garner said, “Mr Burky has been stalking and harassing me,” and has sent various “packages and letters containing delusional and paranoid thoughts and following me
around the country… his obsessive and harassing behavior has escalated to the point of becoming dangerous and threatening.”

Garner also says Burky once showed up at her home and announced that “God has sent him a vision of her being persecuted in some manner that may result in her death.”

Burky is a former mental patient who writes the blog Satanic Panic and believes he was the victim of childhood Satanic ritual abuse.

Read on for more on Jennifer Garner

The Ghosts of Girlfriends Past photo gallery