Tiger Woods may have been crowned Athlete of the Decade by the Associated Press December 16, but he’s not taking home any husband awards. In fact, ABC News and just about everyone else is reporting his “divorce is 100 percent on.” 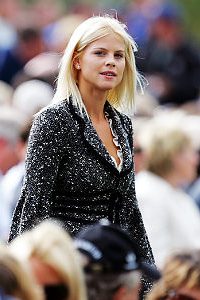 “She’s not
rushing to divorce, however,” the source quoted by ABC News says of wife Elin Nordegren. “She’s going to take her sweet time. She wants all
the dirty laundry to be out on the table before she signs anything.”

With moving trucks spotted outside of the family mansion Tuesday, there’s also chatter that Elin is set to spend the holidays with the kids (Sam, 2, and Charlie, 10 months) in Sweden, without
Woods; has ditching her wedding ring; and is already in talks with Sorrell Trope, an LA-based divorce attorney.

“She knows they’re done,” People magazine touted, quoting a source that says “She will be out in six months to a year.”

While folks are shaking their head at Wood’s growing list of indiscretions, reports are surfacing that his friends are becoming concerned for his wellbeing, The UK Sun claims that he’s
“cracking up” and hiding in a cocoon of cartoons and cereal.

“There is a real concern among his friends that he is dealing with the situation in a very unhealthy way,” says the source cited in the UK Sun.

SheKnows feels obligated to note that neither party has spoken on any of this, and as rumors continue to fly, most remain just that — rumors. One can only have so much faith in unnamed sources!

In fact, Jessica Simpson is apparently looking into filing a suit against Star magazine for their cover linking her to Woods.

“Can’t believe that I’m on the cover of Star magazine with Tiger Woods. What a joke!” Simpson tweeted. “The Shocking Inside Story” is (insert drumroll) a lie!”

With the Woods saga running on rumors, a British bookie is taking bets on how much money Elin will walk away with, assuming she does divorce him. The odds are apparently 25-to-1 she’ll walk away
with over half a billion dollars, and only 6-to-4 for under $100 million.

The odds that we hear more on this story? It’s such a sure thing that no one would take that bet!