The Hangover debuts on DVD and Blu-ray December 15 allowing home video viewers to bask in the comic brilliance that made the film a runaway hit. 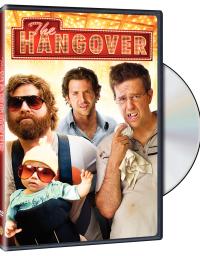 The Hangover possesses
some of the most hilarious moments on film in 2009! Although Bradley Cooper may have been the runaway star from The
Hangover’s enormous summer box office success, the true star of the film as seen on home video, is Ed Helms.

His doctor, sorry, dentist, is a study in how to play humorous without going over the top.

It seems almost fitting that the film truly gets going with the close-up camera work on Helms awaking after the film’s fateful Hangover day.

With his glasses awry, Helms welcomes the audience into the adventure at the heart of The Hangover. What is so fantastically funny
about this new modern comedy classic is how each player brings their comic mastery through each moment of the entire film.

Cooper turns in a star-making performance, sure, but along with Helms, funnyman Zach Galifianakis steals scenes left and right.

The iconic image of The Hangover is Galifianakis, with the baby the boys found, hanging from his chest as the tawdry trio heads out into Las Vegas to sort out their night prior as well as
find their friend who is to be married on a virtual matter of moments.

the Hangover: the synopsis

They planned a Vegas bachelor party that they would never forget. Now they really need to remember what exactly went down! A baby? A tiger? Why is one of them missing a tooth?

And most of all, where is the groom?!

What the guys did while partying can’t compare to what they must do sober in an outrageous caper that has them piecing together all their bad decisions from the night before — one hazy clue at a
time. Director Todd Phillips (Old School) and an all-aces comedy cast tie one on… big time!

On the red carpet for the premiere of Inglourious Basterds