Jason Reitman’s latest film, Up in the Air, is quickly emerging as a favorite for a slew of Academy Award nominations. To think it has only been one day since Golden Globe nominations were announced! 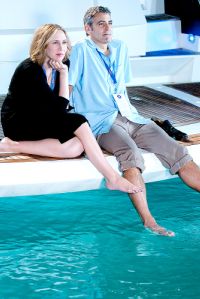 You
may recall the director Jason Reitman’s smash hit two years ago, Juno. The ultimate underdog of a flick was an independent film without A-listers and earned four Oscar nominations
— including winning the Best Screenplay category for its screenwriter, Diablo Cody.

Now that Reitman’s Up in the Air has snagged six Golden Globe nominations, buzz is now in the air with high Oscar expectations for his film staring George Clooney. Clooney’s character is a frequent flier who, well, gives people the pink slip for a living.

Although Reitman himself was jet-lagged when he returned from Los Angeles to New York from the Golden Globe nominations, the 32-year-old indicated there’s quite an excitement wondering
whether or not your name is going to be called that will wake one right up.

“It’s an overwhelming rush,” said the director who was nominated for best director and best screenplay with co-writer Sheldon Turner.

As for what happened after the nominations were announced? Jason Reitman called his father, Ivan Reitman, who was known during his own time for directing smash hits such as Stripes and
Ghostbusters. In fact, Ivan produced the movie which is a recession story, adapted from Walter Kirn’s novel.

Ivan is sharing the spotlight with his son to not only produce a movie which such acclaim before its release but also acknowledge his son’s accomplishments. He was quoted as saying, “As
a parent it’s kind of this remarkable emotional moment that’s kind of hard to describe.”

In addition, other nominations such as best film (drama), Clooney also earned a nom for best actor. Vera
Farmiga and Anna Kendrick both snagged nominations for best supporting actress. Up in the Air will hit theaters nationwide Christmas Day.

Don’t miss our exclusive interview with Up in the Air star Anna Kendrick!

Will the Avatar gamble pay off?