Melissa Rycroft, current Good Morning America reporter and alum of The Bachelor and Dancing with the Stars, got hitched! 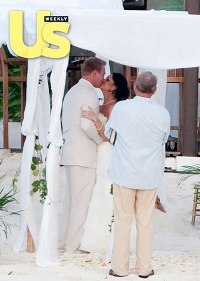 Rycroft may
have walked away from with head hanging after her Bachelor Jason Mesnick dumped her for Molly Malaney on national TV, but on December 12, she and beau Tye Strickland tied the knot in
a sunset ceremony!

As the story goes, Rycroft, 26, and former flame Strickland, 28, met three years ago, but broke up right before Rycroft shot The Bachelor.

After her Bachelor fiance broke up with her, however, she and her ex rekindled their romance.

“Sometimes the stars align and the clouds part and everything works out the way it should,” Rycroft said when she announced her engagement on Good Morning America.

According to US Magazine, the GMA correspondent and Dancing with the Stars
finalist kicked off her shoes on a small island near Cancun, Mexico to walk down the aisle barefoot, wearing a strapless corseted Alfred Angelo gown.

After the 30-minute ceremony, the new hubby and wife shared their first kiss to the beat of Monday Night Football’s theme song, in honor of Rycroft’s days as a Dallas Cowboys cheerleader.

“I’m really happy for her,” her ex Mesnick told People. “This whole journey took her to a place where things looked like they were down for her. But then she ended up with the person she
was mean to be with. That’s what life’s all about. I couldn’t be happier for her.” 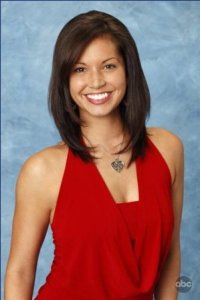 Rycroft and her new hubby are setting up
house in Dallas, and aren’t quite ready to talk kids yet.

“I definitely want to have kids, but not any time soon,” Rycroft told Us Weekly.

SheKnows congratulates the newlyweds and hopes they enjoy their “Us” time.

Kate Hudson and A-Rod, behind the break-up rumors