Ready for some Cheshire grins and Tweedle Dee and Tweedle Dums? Tim Burton’s Alice in Wonderland trailer starring Johnny Depp has officially hit the web in anticipation of its March 5th debut in theaters.

As Depp channels his best rendition of the Mad Hatter and Anne Hathaway portrays the White Queen, A-listers abound as the 19 year-old Alice
(played by Mia Wasikowska) returns to the magical world where she reunites with old friends and realizes she must end the Red Queen’s reign of terror. 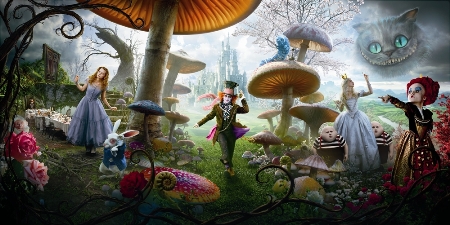 As the Mad Hatter, an orange headed Deep with gargantuan eyes, dishes, “Some say to survive it, you need to be as mad as a hatter —
which luckily, I am.”

In the trailer a delicate, petite Alice makes her entrance as the Mad Hatter jaunts across a tea table to greet her in the middle of the forest. Not to be outdone, the Red Queen (Helena Bonham
Carter) is the tyrant of the land. Opposite the evil Red Queen is Hathaway’s White Queen.

The movie blends CGI and live action which explains the bizarre shape of Carter’s head! In true Tim Burton fashion, reality meets fantasy as the armor-clad Alice and an army of playing cards
roll through the 2010 version of the fabled, Alice in Wonderland.

As for other news from the cast, Depp — never one to shy away from challenging roles — finds his next flick in Hunter S Thompson’s The Rum Diary. Depp plays a
freelance journalist who encounters a pivotal point in his life while writing for a newspaper in the Caribbean. Hathaway has several projects in development as well. In her next role she will
star in Rio. In the flick, a nerdy macau from Minnesota ensues an adventure of a lifetime in Rio de Janeiro.