Cougar Town is a certifiable smash. ABC’s new Wednesday comedy starring Courteney Cox was created and executive produced by Bill Lawrence — the genius behind Scrubs and a former writer on Friends and Spin City with Michael J Fox.

Lawrence and Cox began a creative relationship that commenced with Friends. The Cougar Town duo used Cox’s Scrubs guest-starring run to see if the two possessed
comic chemistry as strong as they believed they did. “We used Scrubs as a try-out, not for her or me,” Lawrence said. “But it was to see how we got along and if we liked
working together on a day-to-day basis.” 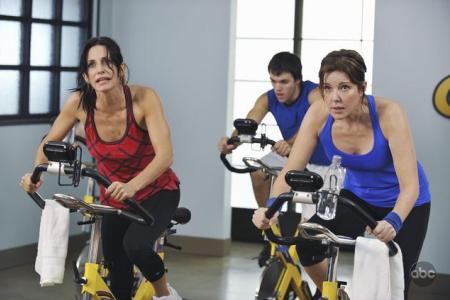 The wife of Cougar Town’s fellow executive producer David Arquette took her funny quotient from Friends and sent it through the roof as a heartless boss on Scrubs.
That dress rehearsal for Cougar Town proved prophetic. Cougar Town has been picked up for a full season by ABC and Lawrence and Cox are riding another wave of comic television
success.

SheKnows: You saw the comic genius first-hand writing for Friends of Courteney Cox.

Bill Lawrence: Wow, man, that’s as solid of an interview start as I’ve ever had for me.

SheKnows: I don’t mess around.

SheKnows: When she joined Scrubs for a few episode arc. Did you as the creative force behind that show immediately think of Courteney for Cougar Town?

Bill Lawrence: I’ve known Courteney for ages. I wrote on the very first year of Friends. We were kind of peripheral figures in each other’s lives and would run
into each other. We had started talking about her doing a comedy before she came on Scrubs.

SheKnows: Are you Bill, frankly, surprised at how much Courteney’s character and Cougar Town has a whole, resonated with audiences?

Bill Lawrence: You know what? I was really nervous about it, honestly. It’s because I like Courteney and I did not want to let her down. I knew people were going to check it
out. I knew that it had some certainly, had some danger spots (laughs). If we were too sketchy, too demeaning or too filthy for the sake of being filthy that people would really turn on
the show. I’m really happy with what it’s evolved into. I feel like it’s really kind of overnight changed from a show that might have been too narrow of a woman out seeking her
twenties again in her forties because she’s single to kind of a dysfunctional family show which Courteney is the center of who are all dealing with trials and tribulations (laughs), you know.
I really feel it’s working now, so I’m so happy about its’ success.

Cougar Town is a family show at its core 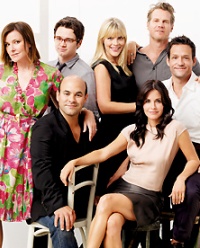 SheKnows: You sensed that
in the Thanksgiving episode…

SheKnows: That really felt, like you said, a caring dysfunctional family that has Courteney at the center.

Bill Lawrence: I think it’s so great because she so awesome. Obviously, this show was sold on her. She was, as an executive producer of it, to know that we had to branch out
and become about more than six or seven episodes about a single woman in her forties. As she’s found different dynamics with each character, it’s gotten easier and easier to write.

SheKnows: Also, the rest of the cast had to be a thrill as it filled out.

Bill Lawrence: I have lucked out. Every even remotely successful writer owes a ton of thanks to casting and actors and actresses that can elevate material. They do something super
funny that you never imagined. When somebody says, “that was great.” You just take credit for it.

SheKnows: (Laughing) Immediately I think of Miss Busy Philipps and it seems like she’s right on…

Bill Lawrence: Busy’s hyper-talented. You know that. If you’re a fan of television, the thing that strikes me about her, there are a lot of people who are great doing
their thing. Busy, though, is great at doing a bunch of different things. I barely recognize her on ER.

Bill Lawrence: It was so completely the antithesis of what she normally plays. She’s crazy talented.

SheKnows: She is such nice book end to Courteney as she’s navigating her new life.

Bill Lawrence: I like the idea of Courteney trapped between these two friends. One, who in a lot of ways represents the old life she used to have and what she wants someday again
in her neighbor Ellie. And the other representing what she missed and the path that she occasionally wants to dip her feet in – I think it’s a nice tug-of-war. 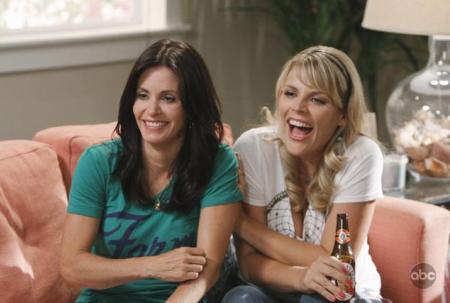 SheKnows: With Scrubs, Cougar Town and obviously on Friends as a writer, you really have a knack for capturing the modern woman. Were you

Bill Lawrence: Oh God, what a good guy to say that! I would say the opposite. Early in my career, one of my weakness was I only wrote about guy friendships. Scrubs, the
heart of Scrubs and Sin City were dudes. One of the things is as I’ve grown. I’ve been married now for a decade now to Krista Miller as most married men experience, my
life has become one in which I’m surrounded by women that are smarter than I am and control everything I do.

SheKnows: I know what you mean!

Bill Lawrence: Yeah! I hope, after being in that fishbowl for a while, I’ve gotten a little better at it.

SheKnows: I would say so with the female centric mastery of Cougar Town. Now, as you grown as a writer, what inspired you to actually to get into writing in the first
place? 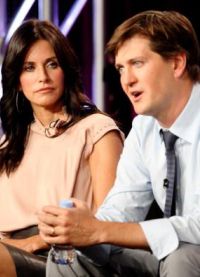 Bill
Lawrence: I really wasn’t good at anything else (laughs). For me, it was going to be TV writer or house painter. Those are both the things I’ve done for a living. The
one academic thing that I ever enjoyed was writing. I loved, even as a kid, television, was obsessed with movies, cartoons and TV. I wanted to do it since I was little. You have my permission Joel,
if anyone who writes comedy for living ever complains about their livelihood, you can reach across and choke them. It is such a fun job and I’m super lucky. The thing I lucked out with is,
you have this man, if you know what you want to do when you’re young, you have an advantage over buddies that are going to law school because they haven’t figured it out yet
(laughs).

SheKnows: That is exactly it. Believe me, law school was an option that was tossed out there by parents and I even got in…but a writing job saved me!

Bill Lawrence: Well, there you have it. Law school, med school, what are you going to do? My parents were horrified that I was going to Hollywood. But, supportive enough that I had
all the support from them to be lucky with my writing. Everybody here gets lucky.

SheKnows: Lastly I wanted to ask you about working with an icon on so many levels, Michael J Fox.

SheKnows: What a treasure of an individual…

Bill Lawrence: One of the best experiences of my creative life and I’m sure this is true in all careers, for me, he was an iconoclastic figure and the fact that in the times
where maybe in this time when celebrities…and athletes (clears his throat), let you down (laughs), to meet a guy that turns out to be as great as you had hoped he would be,
you know what I mean?

Bill Lawrence: His ability to portray characters, his charm as a human being, is something I will never forget. It makes me a little harsher on people that don’t measure up.
He’s an amazing dude. He works harder now than when he was a full time actor.