Chris Brown is feeling the backlash from retailers for beating up Rihanna. 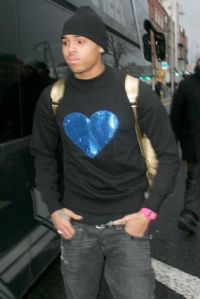 Brown, who was arrested and sentenced in the incident in which fellow singer Rihanna — his girlfriend
at the time — was viciously beaten by his own two hands, is livid that retailers are not carrying his new album.

Some of Chris’s few remaining fans complained that they could not find his new album on shelves. One fan was told by a store manager that they didn’t want to stock CDs by woman beaters; another store said they would never carry Chris Brown.

Brown himself decided to check it out and went to a Connecticut Walmart and found not a single one of his albums. Brown went ballistic on his Twitter page and sent a series of angry tweets. Many
have since been removed from his feed, but thanks to the permanent nature of the internet we have them all for you!

“Just was at Walmart in Wallingford CT, 844 North Colony…the(y) didnt even have my album in the back… not on shelves, saw for myself”

“We talked to the managers and the(y) didnt even know anything. Wow! But they had Alicia Keys album ready for release for this Tuesday comin.”

“The manager told me that when there are new releases its mandatory to put em on the shelves…but no sign of Graffiti. BS”

“No disprespect to Alicia at all.. just givin an example to whos album is loaded and ready to go next week”

“I’m tired of this s***, major stores r blackballing my CD. not stockin the shelves and lying to costumers. what the f*** do I gotta do.”

“Yeah I said it and I ain’t retracting s***. I’m not biting my tongue about s else…”

Cry me a river. Most of the messages were removed shortly after they were posted, and now Brown’s entire Twitter page is down. Good riddance.

Can you believe Brown is so blind?