The father of Lindsay Lohan denies reports that he was arrested for violating a restraining order. We get all the juicy gossip on SheKnows.com! 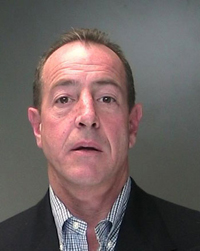 Michael
Lohan was reportedly arrested after he called his ex-fiancee Erin Muller, violating an order of protection put in place against him last May when he threatened to kill both Muller and himself.

But despite the existence of a mugshot, Lohan denies the arrest. He told Radar, “I was not arrested. Erin and I had an argument. She has an ongoing order of protection against me. She called and
said I violated it by making a phone call to her. I went down there today and saw the judge and I handled it and that was it.”

Clearly it was just Glamour Shots day at the court house.

Meanwhile, Lindsay Lohan has just returned from a trip to India where all the good opiates are and is financing her “lifestyle” by selling
her family’s used crap on their website, including a pair of Marc Jacob boots for $400, autographed Lindsay dolls for $150, a Juicy Couture vest for $154 and a Chloe dress for $600.

Another interesting find: a pink shirt by Charlotte Ronson, the sister of Lindsay’s on-again, off-again girlfriend Samantha Ronson, for
$100. Even more interesting: the designer’s name is spelled incorrectly on Lindsay’s site. No wonder the Ronson family hates her. You know, in addition to the “alleged” trampiness, drug use and
thievery.