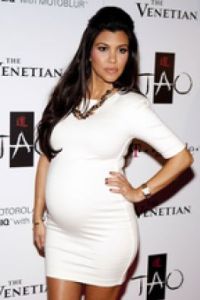 Mason Dash Disick landed in Los Angeles at around 8:30 am, weighing in at 7 pounds, 6 ounces and measuring 19.5 inches.

“A boy is definitely needed in this family!” Kourtney told E! News back in October. “Scott and I are thrilled to add a little boy to the bunch.”

As fans no doubt notice, the newborn gets his middle name from the family boutique, and conveniently enough, he’s arrived just in time to catch tonight’s one-hour premiere of his mom’s show,
Keeping Up with the Kardashians.

Even more apropos, the episode, entitled Scott on the Rocks, is about the family’s contentious relationship with Kourtney’s on again-off again beau and baby daddy. As the series website
previews, “Another outrageous season kicks off when Kourtney and Scott find them themselves pitted against her family who loves to hate Scott.”

The episode also has Kim feeling the weight of all her sister’s successes. She may have been the one with a very public and rockin
relationship for years, but her tenuous romance with New Orleans Saints’ Reggie Bush has seen its share of ups and downs and when this episode was shot, newlywed Khloe was adjusting to life as a
married woman and Kourtney was still expecting baby Mason.

That said, it hasn’t been an easy road for the new parents, either. Kourtney and Scott broke up last year, apparently amid accusations that Scott had cheated on Kourtney, and Kourtney didn’t
initial reveal he was the daddy. They’ve been quite cozy since they announced a baby was on the way, however, so many fans expected Kourtney would be the first Kardashian sister to get hitched.

Instead, Khloe and Lamar Odom pulled off one of the most surprising
last minute weddings in TV history and there’s still been no word of wedding bells for the new parents.

We’ll surely be hearing about that issue in the premiere, which airs tonight at 9:00 pm (after a rebroadcast of the Khloe-Lamar wedding episode, of course).

In the meantime, SheKnows congratulates the new parents and wishes them luck.