For those of us who watched television this past weekend, there was a lot of face time for President Obama. Between 60 Minutes and his interview with Oprah Winfrey at the White House, viewers got a glimpse of the commander in chief and a variety of topics ranging from the serious to not-so serious.

As for starters, during President Obama’s interview on 60 Minutes, he was asked about difficult decisions he makes on a
daily basis. As for his answer? Increasing the number of troops fighting in Afghanistan. In response to saying that some people indicated his speech announcing the increase of troops lacked emotion
or even enthusiasm, the President of the United States of America said the speech was his most emotional. He was looking over a group of cadets, some of whom were going to be deployed in
Afghanistan. He realized some may potentially not come back. 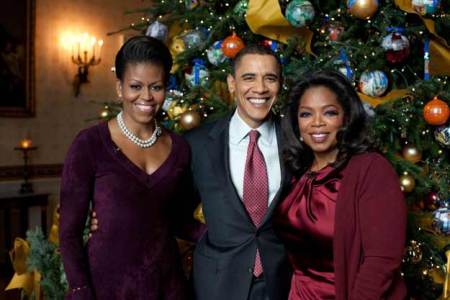 Switching gears, when Oprah asked him about the grade he would give himself, the president said, “a good solid B-plus.” Granted, this is a tricky question: certainly no president would
want to underestimate their abilities or in this case, report card nor do they want to appear overly generous knowing there is still a lot of work that needs to be done.

That said, President Obama explained, “We have inherited the biggest set of challenges of any president since Franklin Delano Roosevelt. We stabilized the economy. We are on our way out of
Iraq. I think we’ve got the best possible plan for Afghanistan. We have reset our image around the world.”

Not to be outdone, First Lady Michelle Obama got some face time as well as a freshly groomed dog, Bo Obama, greeted Oprah and did a few
tricks. Apparently Bo can sit on cue, who knew?! He also high-fived Oprah and she joked with Michelle that perhaps Bo could use a buddy in the Oval Office. The First Lady quickly responded that one
puppy is definitely enough.

And as for the party crasher question? During 60 Minutes, President Obama was pretty clear the only guests at the White House would be invited ones. He referred to the party crasher
incident a la Salahi’s as a “screw up” and that he was unhappy with people who were involved. He confirmed that he was “seriously angry” about the security breach and
ensured it will not happen again.

Oprah’s retirement in her own words

Michelle Obama named Most Fascinating Person of the Year