Tiger Woods is taking an ‘indefinite leave’ from golf following his cheating scandal.

In wake of his explosive cheating scandal, Tiger Woods has announced he will be
quitting the game that made him famous in favor of staying out of the public eye. 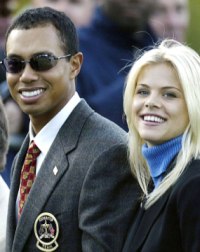 In a statement released through his website, Cheatah says he plans to stay away from golf “indefinitely” to focus on his
family — Could this be the downfall of a golf legend?

“I am deeply aware of the disappointment and hurt that my infidelity has caused to so many people, most of all my wife and children. I want to say again to everyone that I am profoundly sorry and
that I ask forgiveness. It may not be possible to repair the damage I’ve done, but I want to do my best to try.

I would like to ask everyone, including my fans, the good people at my foundation, business partners, the PGA Tour, and my fellow competitors, for their understanding. What’s most important now is
that my family has the time, privacy, and safe haven we will need for personal healing.

After much soul searching, I have decided to take an indefinite break from professional golf. I need to focus my attention on being a better husband, father, and person.

Again, I ask for privacy for my family and I am especially grateful for all those who have offered compassion and concern during this difficult period.”

While Tiger, barring any hugely catastrophic financial missteps, will never have to worry about how he’s going to pay his electric bill, he is already feeling the heat from companies he endorses.
Since the news of his rampant infidelities to his wife Elin, with whom he has two small children, Gatorade has announced they will pull their Tiger Woods-themed sports drink. While Nike says they will stand by their man, both AT&T and Gillette are distancing themselves from their
former golden boy.

Gillette said in a statement, “As Tiger takes a break from the public eye, we will support his desire for privacy by limiting his role in our marketing programs.”

And from AT&T: “We support Tiger’s decision and our thoughts will be with him and his family,” the company said. “We are presently evaluating our ongoing relationship with him.”

Cheatah’s name also disappeared from the website of one of his biggest sponsors, financial services firm Accenture.