A court ruled that Jon Gosselin must get permission from TLC to do any interviews or personal appearances. 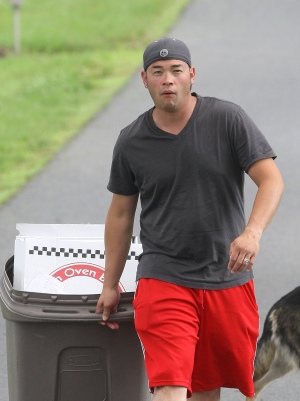 TLC is suing the dad of eight for breach of contract after Jon
refused to allow the kids to continue filming Jon and Kate Plus Eight. Jon reportedly pulled the plug out of spite when the show
was renamed Kate Plus Eight after the marriage fell apart because Jon was getting’ it on with the babysitter.

Despite the filming hiatus, the family is still under contract with TLC, and the cable networks says Jon has been breaking the agreement pretty much every time he wakes up. TLC honcho Edward Sabin
testified that Gosselin broke his contract by accepting money for interviews and making personal appearances without the permission of the network.

Much of those interviews and appearances were embarrassing to TLC, which prides itself on family-friendly programming. Sabin specifically pointed out Jon’s propensity for chatting with the
paparazzi at the fence in front of the family home, taking a trip to France with his girlfriend to visit Christian Audigier immediately following his and Kate’s separation announcement, telling the media his children would model a clothing line and hosting a Vegas pool party.

In fact, Sabin says, TLC specifically ordered Jon not to host the party at the MGM Grand in Vegas over the summer, but Gosselin did it anyway.

“Jon surrounded by scores of bikini-clad women is inconsistent with the image of our show,” testified Sabin.

Now a Maryland judge has issued a preliminary injunction against Gosselin, stating he must abide by TLC’s rules — no more interviews or appearances without the network’s permission, or else.

A TLC rep reacted to the news: “The Court has validated our view that Mr Gosselin has a valid, binding contract and that he has breached it repeatedly… we look forward to the next phase of the
litigation, which is to pursue our claim for damages resulting from Mr Gosselin’s numerous breaches.”

TLC plans to go ahead with a lawsuit to recoup losses suffered when Jon pulled the plug on the show.