(500) Days of Summer arrives on home video December 22 and in honor of its arrival, SheKnows and Twentieth Century Fox Home Entertainment wondered what are your favorite parts of your city? In (500) Days of Summer, This is some text. Joseph Gordon-Levitt and Zooey Deschanel cross their city visiting sites, places and scenes that provide the backdrop to their story of falling in love in the titular number of days — and yes — Deschanel plays Summer.

(500) Days of Summer’s tagline is “This is not a love story. It’s a story about love” and it could not be more true. When the Blu-ray and DVD of (500) Days of Summer arrives December 22 in time for Christmas, audiences will rediscover the movie magic that made the film a romantic hit during its theatrical release.

The film recently earned honors with several nominations at the Independent Spirit Awards. 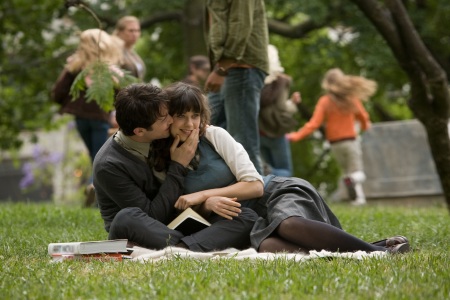 Whether it’s locales that serve as serene spots for personal reflection, reading or people watching or the choice sights that always impress on a date, SheKnows wondered: where do you go in the city to get away?

SheKnows will choose five sites at random and those winners will each receive a copy of the film’s DVD when it arrives December 22.

Days of Summer is not the typical boy meets girl tale. In this film with Deschanel’s impeccable performance, the story more plays out like boy meets girl, boy falls in love and girl doesn’t.

Deschanel and Gordon-Levitt chemistry is priceless as a pair of young people who find each other despite wanting different things out of life where they currently stand.

Gordon-Levitt is a greeting card writer who believes love is supposed to play out as if it came from one of his cards. The complexity of reality sets in when he falls for Summer and her attraction, yet slight indifference to him, proves that all is not fair in love and war.

But, where (500) Days of Summer scores as a romantic comedy is just that, it has moments of great hilarity.

Read on for more DVD news

Public Enemies online exclusive!
Inside Julie and Julia with Meryl Streep
Harry Potter and the Half-Blood Prince: inside the DVD and upcoming Orlando theme park!