The holiday story revolves around eight-year-old Virginia (Beatrice Miller), a New York City girl in the late 1800 who wants to know the truth about Santa. 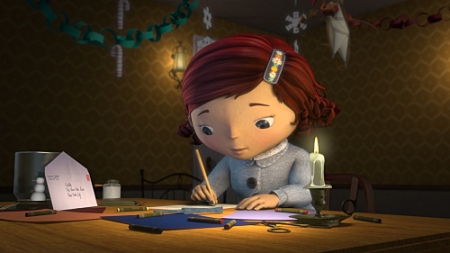 It all starts when a school bully (Julian Franco) announces that Santa doesn’t exist. Not sure what to believe, Virginia and her pal Ollie (Kieran Patrick Campbell) hit the streets of Manhattan to
find answers.

Out on the adventure, she makes new friends, including a scraggly Santa (Michael Buscemi) who’s trying to raise money for those less fortunate and an overeager librarian with a shelf of books on
the holiday, but Virginia doesn’t find a clue. Her quirky father (Neil Patrick Harris) and well meaning mother (Hewitt) can’t seem satisfy her curiosity, either.

Virginia turns to the New
York Sun, a trusted local paper with the motto, “If you see it in The Sun, it’s so!” The Grinchy editor Francis Church (Molina) has more important news to handle,
but Virginia isn’t one to give up that easily!

With the help of her scraggly new friend, she finally gets an answer: “Yes, Virginia, there is a Santa Claus!”

Christmas buffs and news historians will recognize the story, based on Virginia O’Hanlon’s real life adventures back in 1897. Her answer ran in September 21 edition of the New York Sun and is considered by many the most famous editorial of all time.

You can catch the premiere of Yes, Virginia on CBS, December 11 at 8 pm.