The Top Chef winner was announced as the finale of Top Chef 2009 showcased three chefs: Bryan and Michael Voltaggio and Kevin Gillespie. 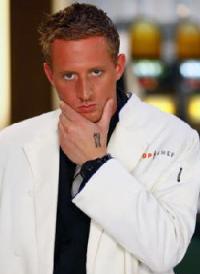 As anticipation
mounted and they prepared their final meal, the contestants were able to get assistance from former competitors on Top Chef. Bryan selected Ashley and fourth-place finisher Jennifer Carroll. Michael selected Jesse and Eli and
Kevin selected Preeti and Ash.

Finalists received a mystery box with a Pacific rockfish, Dungeness crag, kabocha squash, Meyer lemon, matsutake mushrooms and anise hyssop which had to be combined into a scrumptious dish.

As the three Top Chef finalists returned to the kitchen to do what they do best and, low and behold, their mothers walked in the door to support them! And of course, cook up a last minute
challenge. The three chefs were informed they had to serve a four course dinner.

As for the first course, Bryan, Michael and Kevin had to create something inspired by a favorite childhood dish they would create and serve to their mothers. Next up? They had to serve the mystery
box dish as a second course followed by a third course that was up to them. The fourth course consisted of dessert.

As for the winner? The judges decided that Kevin as an excellent chef who simply had an off night, therefore he got the boot. As Michael Voltaggio nabbed the prize of Top Chef, the
emotional ending resulted in the brothers indicating they would have rather be competing against each other than any other chef.

The Biggest Loser winner’s in love!