Hulk Hogan claims his ex-wife stripped him of his most treasured possession when they separated: his antique toilet seat. 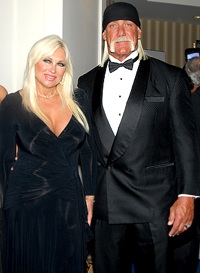 Hulk, who is newly engaged to a girl his daughter once
counted her closest friend, says ex-wife Linda Bollea pillaged their Pinellas County, Florida home.

Court documents filed by Hulk claim Linda took off with everything of value, including
chandeliers, a wine rack, bathtubs, speakers, fixtures, a tanning bed and “the wooden antique toilet seat from the guest house.”

The wrestler says the house looks so bad now that he won’t even let his realtor show it to potential buyers, and because of that he can’t sell it and move on.

Linda is not taking this sitting down, however. She issued a press release regarding The Case of the Purloined Potty calling Hulk out on his shenanigans:

“He knows I’m using the wooden toilet seat as a frame for his picture ever since I found out he is a serial cheater and liar. Once he comes clean and starts to be honest, he can have it back.”