With the mistress count now reportedly up to 11, Tiger Woods’ wife Elin Nordegren has moved out! 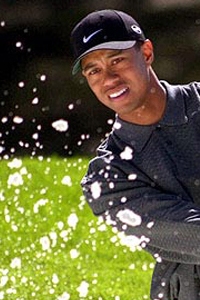 With money to be made, women are coming out of the woodwork with lusty stories about the golfer, with the total currently at eleven. While some aren’t talking, others, including the Rachel Uchitel
and reality show contestant Jaimee Grubbs, are offering up their stories, as well as private texts, emails and voicemail messages from Tiger.

There’s now speculation floating about sex tapes, unsafe sex, bribes to stay quiet and illegitimate children, though nothing has actually been uncovered.

If sex scandal isn’t enough to get your interest, there’s now speculation that Woods abuses drugs like Ambien and Vicodin. That factoid apparently comes from a few of the mistresses, while
TMZ reports that Woods was actually hospitalized for an overdose the night of the fateful car accident that set off this on slot of news stories.

With all the hubbub, there continues to be speculation that Woods will flee the country for privacy, but it no longer sounds like his wife will join him. Word is Nordegren moved out of their place
on December 7 and is staying at a nearby friend’s. She’s also reportedly bought a manse back in Sweden for $2 million, but not with Woods. She may run, but it won’t likely be with
him.

Meanwhile, there’s been chatter the couple was back together for a top secret meeting with a “suited man” yesterday, which has led to speculation that Oprah offered Tiger a chance to finally speak
for himself. SheKnows wonders if he might be Barbara Walters’ surprise guest on her December 9 10 Most Fascinating People
of 2009.

We hate to say it, but stay tuned for the next installment…there’s sure to be more on this story!

Was there a Tiger Woods crash cover up?