If you’ve been watching The Biggest Loser, you’ll know that Rebecca Meyer won the $100,000 prize for losing the most weight since being booted off the show. You’ll also know that she chopped her hair! 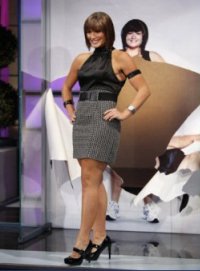 On The Biggest
Loser finale it was revealed that Meyer went from 279 to 140 pounds for a total weight loss of 139 pounds! She also cut ten inches of her hair, went blond (she dyed her hair black for the
show), and wore a slinky dress.

The twenty-five year-old student from Iowa remarked, “Dying it back blond, and cutting it this short — something I’ve never done before — it’s like stripping everything away. I
have no excuses anymore. It’s just me. It’s like coming back to my roots!”

In fact, her boyfriend and fellow Biggest Loser contestant, Daniel Wright, approved. He loves the new ‘do and although
previously preferred long hair, he indicated, “I love it and she looks great.”

The couple met on the ranch and fell in love after their on-air duties. On December 11 they’ll celebrate their three month anniversary. Meyer explained, “Everyday, I fall more in love
with him. He’s my touchstone. He’s the person I can go to when I’m feeling down about something. He’s my best friend when I need him to be my best friend and he’s my
boyfriend when I need somebody to comfort me.”

Wright has lost a total of 253 pounds and notes their relationship post-ranch is flourishing. “Things just couldn’t be better. I’m so proud of her. She was so worried about what
could happen and I said, ‘You did your best, so whatever happens, happens.'”

As for the million dollar question (or in this case, $100,000?): She’s moving out of her parents’ house and moving with her boyfriend. Since she lives in Des Moines and he lives in
Willow Spring, North Carolina, they aim to move some place else together. He noted, “We don’t know exactly where, but we’re talking about it.”

Everything you need to know about The Biggest Loser