After emerging from prison, Mandela wins the nation’s first democratic election to become its first black leader. Economic hardship fueled by apartheid’s legacy is threatening the
burgeoning free state. Meanwhile a leader of another kind, Francois Pienaar (Matt Damon) sits in front of a South African national rugby
team as its captain entering the World Cup as the biggest of underdogs. 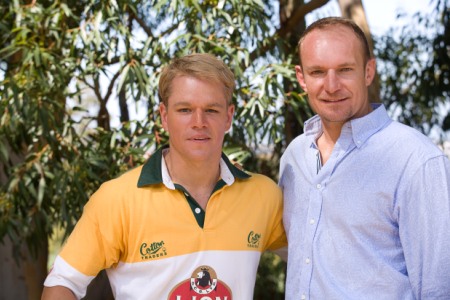 Freeman’s Madiba (an affectionate name given to Mandela as the leader of his clan) reaches out to Damon’s Pienaar and presses not only his story, but that of a nation in need of unity.
Mandela saw the power in sport and called upon his rugby team to do nothing less than win it all.

SheKnows sat down with Damon and Freeman to talk about Invictus and how after 15 years of people wishing he would play Mandela, Freeman finally has his Nelson Mandela project with his old
friend Clint Eastwood directing. Damon, Eastwood and Freeman are all Oscar winners. Considering their collective resume and the power of
Invictus’ true story, the current Oscar buzz for all the film’s players is hardly a surprise — but, it is incredibly warranted. Their film is an instant classic. 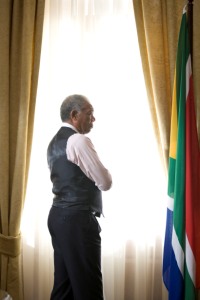 SheKnows: You’ve been mentioned as someone to play Mandela for over a decade now. How did it take so long?

Morgan Freeman: This started out with Madiba naming me his heir apparent, so to speak, when he was asked during the press conference for his book Long Walk to Freedom. “Mr.
Mandela, if your book becomes a movie, who would you like to play you.” He said, “Morgan Freeman.” So, from then on, it’s like Morgan Freeman is going to be Mandela,
somewhere down the line. We spent a lot of time, Laurie and I — my producing partner — trying all this time trying to develop A Long Walk to Freedom into a movie. It couldn’t happen. Then,
in ’06 I believe, we got this book proposal (Invictus) from John Connor. It was perfect. We bought it, we got a script written and this was the role to play to give the world an
insight into who Mandela is and how he operates.

SheKnows: Any pressure on you, Matt, to portray a real sports hero that perhaps Americans are not so familiar with?

Matt Damon: The first thing I did is I called Clint and I said that I can’t believe this happened. I can’t believe this story is true. He said he couldn’t either.
But, this is true. I immediately went and looked up Francois online. I said to Clint, “this guy is huge.” (Laughs) He and I had never met, but I told him I was five (foot) ten. He said,
“(In his best Eastwood) Oh, don’t worry about that.” OK, I won’t worry about how I need to grow about six inches to play the guy. I had six months to get ready. I
worked hard on the accent and training physically to kind of build myself up to try to pull off the illusion of being the captain of the South African rugby team. When I got to South Africa, the
very first day, Francois had me over to his house for a gourmet dinner that he was cooking. He invited me to meet his wife and two boys. Morgan and I went. I just rang the doorbell, he opened the
door and I looked at him. The first thing I said to Francois Pienaar was “I look much bigger on film.” He laughed, gave me a big hug and brought me into his house. That was it. We were
off and running.

SheKnows: How much did Francois to turn to serve as a resource during the actual filming?

Matt Damon: He was an invaluable resource for me the whole time. Everything from what color was your mouthpiece to what his attitude towards leading a team and life in general.
He’s incredibly available.

SheKnows: And the aspect of this Nobel Peace Prize winner and human icon playing a role in this man’s life…

Matt Damon: It was the greatest leader of our time reaching out to another leader and forging a bond with him and basically saying I need to use you to do this and the guy saying
“I know exactly why.” They were asked to exceed their expectations and this team exceeded expectations. It’s a metaphor for what the country needs to do. Everybody’s
expecting him to not be able to heal the country.

SheKnows: What aspects of Francois did you feel the most important to get across to audiences?

Matt Damon: Francois’ integrity and his leadership was what I needed to get across. Then, of course the physical things like lifting weights (laughs).

SheKnows: You had to get in fierce shape for the Bourne films. How does playing a rugby player differ in the training regimen?

Matt Damon: I was in better shape with this movie (than for the Bourne movies). Francois came to the gym with me a couple of times. This is his life. I don’t
want to embarrass him. If Jason Borne looks a little flabby, that’s on me (laughs). I wasn’t going to be for any lack of effort — which actually is what the team is famous
for. They are known for going the extra mile. Knowing themselves, to say that we might not be the most talented team and the line is even in the movie, the coach says, “We may not be the best
team, but we will be the fittest.” Francois told me their training regiment. It’s unreal what those guys went through.

SheKnows: Matt, have you played rugby since working on Invictus?

SheKnows: What did you two know about rugby before Invictus?

Morgan Freeman: Nothing. I know American football. I know a little bit about soccer. I know baseball, I know basketball. But, rugby is a foreign language.

Matt Damon: And you know golf…

Morgan Freeman: I do know golf.

Matt Damon: I’m with Morgan. I knew very little about Rugby. But, I think it helps in terms of an American audience the game is enough like football in that it’s a
battle for field position and you score by running into what looks a lot like an end zone. I think in terms the nuance of the game, Americans won’t get that stuff. I think in terms of the
peanut butter and jelly version of what you need to know, I think it’s pretty clear. 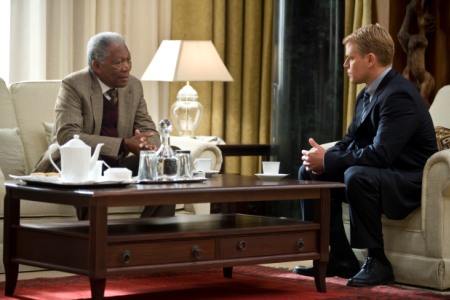 Matt Damon: I was pretty good.

SheKnows: Morgan, finding the Mandela character, did it begin back when he made that fateful statement?

Morgan Freeman: I had to start then, when he said that back in the ’90s. I met him soon after that. I said to him, “If I’m going to play you, I’m going to
have to have access to you. I’m going to have to be close enough to hold your hand. Over the years, while we were trying to develop Long Walk…that’s what happened. Whenever we
were in proximately, like a city away, I would know about it and I would go to him. We’d have lunch, dinner or sit with him while he’s waiting to go onstage for whatever. During that
time, I would hold Madiba’s hand. That’s not for camaraderie. I find that if I hold your hand, it transfers an energy first. I have a sense of how you feel. That’s important to me
trying to become another person. I have a lot pressure to bring a character to life in any kind of real sense. The danger of course is always is caricature. The biggest challenge was to sound like
him. Everything else is easy to do, walk like him. He has a few ticks and things I noticed that I picked up. I didn’t have any agenda, as it were, in playing the role other than to bring it
as close to reality as I possibly could.

SheKnows: Invictus could easily pick up The Blind Side’s mantle in a country gone made for true-story sports films, but Clint’s film is so much more.
We’re talking history.

Matt Damon: The film is telling a story that is a wonderful thing to remind everybody of in South Africa and all over the world. If we listen to the better angels of our nature,
there are creative and good solutions to serious problems. It’s an incredibly uplifting movie. From the moment I read it I was excited to be a part of the ensemble that told the story. I
think it’s a good thing to put there, particularly now. There’s not a lot of good news, so this is a nice thing for the holidays.

SheKnows: Morgan, you have previously worked with Clint and have called it a very relaxed set.

SheKnows: What is it about Clint Eastwood that keeps you coming back? 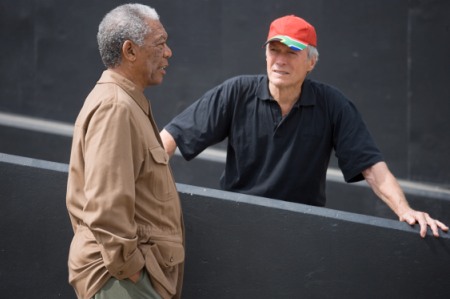 Morgan Freeman: He expects you to know what you’re doing. He’s going to take two giant steps back and let you do it. I have such appreciation for that part of him. The
other part of him, Matt says it’s a tight ship. I think it’s a well oiled machine. Everyone that works with him has the same reaction, “Can I stay with you?”

SheKnows: What about you Matt, working on an Eastwood film?

Matt Damon: Morgan and I were saying yesterday maybe if we sit out for the next few years and let Clint get a little experience, he’s going to be a good director
(laughs).

Matt Damon: Three more he’ll be solid. It’s an incredible experience having been on over a hundred film sets between us. It doesn’t get any better than the way he
runs it. As Morgan said, Clint enables and allows things to happen. You walk on some sets and it’s like walking into an emergency room. It’s like, “Come on guys, we’re just
making a movie here.” That tension runs into the performances and into the movie. Clint just runs an incredibly tight ship, but it’s really laid back. He always said on a set, and
pardon my language, but he says, “well, we don’t want to f*** that up by thinking about it too much.” 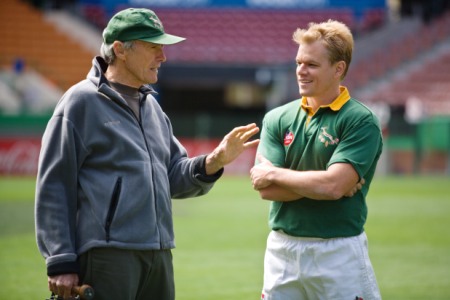 Morgan Freeman: Yeah, you don’t want to go to Clint and say, “I’d like to talk more about my character.”

The Blind Side blindsides the box office

Anna Kendrick exclusive chat for Up in the Air