Lady Gaga and Miley Cyrus met the Queen of England, and SheKnows is surprised to report Gaga’s over the top fashion was fit for a queen, while Miley’s two outfits were decidedly not. 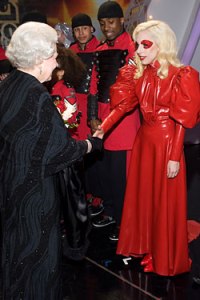 The two American girls were on
hand to perform at the Royal Variety Show, England’s annual effort to raise money for the Entertainment Artistes’ Benevolent Fund. The Queen, who is a patron of the fund, was escorted by the Duke
of Edinburgh and enjoyed a lineup that included performances by Michael Buble, Bette Midler, Mika and Chaka Chan.

Clearly keeping her audience in mind, Lady Gaga showed serious restraint, while looking as fantastic as ever.

Her red latex gown kept her covered, for a change, while making a nod to Elizabeth I in style. She further maintained her allusion to the classics with her piano, a 30-foot high masterpiece
reminiscent of Dali.

With her eyes circled in wild red sparkles, Gaga took the stage and was raised up on a swing, with her gown’s train falling 20 feet below her. It was all the performance art we expect from Gaga,
with a bit less skin and scandal.

Miley, however, must not have received the same memo as Gaga. She actually donned two outfits for the evening. Both were hot and would not likely raise a stink on most occasions, but seemed racy
for a meet with the queen! 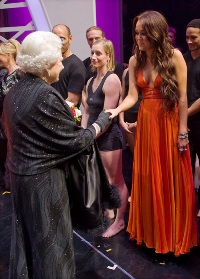 The 17-year-old, who caused a stir after
her infamous Annie Leibovitz shoot for Vanity Fair, took the stage in leather hot pants to put on a very sexy number. She even grabbed her crotch!

She showed restraint before meeting the queen, however, covering those bared thighs with a full-length Grecian gown. It was a great look for her, but that seemed like a lot of cleavage to show the
queen!

In fact, it’s a good thing she was meeting the Queen of England instead of the Queen of Hearts. Otherwise, we might have heard the call, “Off with her head!”

Miley Cyrus not so “G” Rated in concert!