In the latest Tiger Woods developments in Florida, earlier today a woman was taken to the hospital from Tiger Woods’ home. Local television stations in Orange County, Florida have reported the woman as being Woods’ mother-in-law, Barbro Holmberg.

Initially it appears that Holmberg refused transport. Soon after it became obvious she needed advanced-life-support efforts that go beyond typical CPR techniques, Wood’s mother-in-law was taken on a stretcher into the hospital and treated for stomach problems. 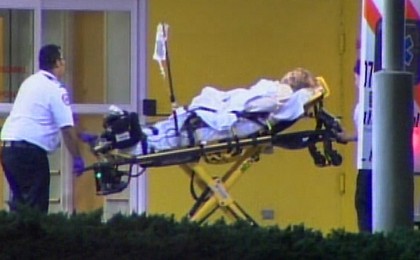 This all occurred one day after Woods’ wife, Elin Nordegren, moved out of their home. While Woods has certainly made headlines for
transgressions and countless mistresses, the latest news from his home continues to make headlines as well.

And in an interesting twist of fate, while it’s no surprise late night comics are having a field day with the stories, ironically David Letterman, who himself experienced some transgressions
of his own a few months ago in the public spotlight. He opened his show with his usual monologue: “Boy, it looks like that Tiger Woods is having some trouble, you know, I was thinking if this thing
happened three months ago, I’d have material for a year.”

Letterman’s Top 10 list also reflected the golfer including “Top 10 Ways Tiger Woods Can Improve His Image.” For instance, “Crash a state dinner at the White House,”
came in at number 10 and “Change name from Tiger to more adorable Puppy,” was number nine. In introducing the list Letterman quipped, “Maybe I’ll learn a little something
here myself.”

Details of the Tiger Woods accident