TV journalist Bryant Gumbel revealed he has lung cancer during a guest hosting appearance on Live! With Regis and Kelly. 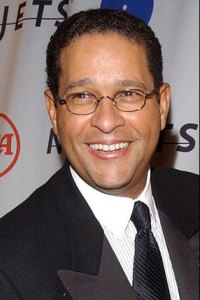 Gumbel, a former
Today show anchor and host of Real Sports, made the statement when explaining why he would not be able to join Dancing with the Stars cast member Julianne Hough for a
spin around the floor.

“Two months ago, I had cancer surgery,” he continued. “They opened up my chest. They took a malignant tumor and they took a part of my lung
and some other goodies.”

But Gumbel says he’s already on the mend. “The pathology on most of the stuff came up benign but enough of the aggressive cells had escaped the tumor that it warranted some treatment,” he
continued. “I went through that and it’s done now.”

This frank admission marked the first time Gumbel spoke of his disease outside of his family. “We had told a few people, we told my family, obviously. I even kept it from my staff at Real
Sports. So I’m okay for the time being,” he said. “I’m hoping they green light me to play golf again.”

The popular journalist, 61, has two children from his first marriage, which ended in a contentious divorce amidst rumors of his infidelities. He has since remarried.