Lost: The Complete Fifth Season streets December 8 and we’ve got your inside look at the DVD and Blu-ray that precludes the hit ABC show’s final season. 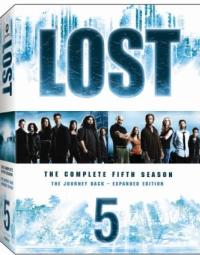 As expected from the show that features a
website devoted to the fictional airline that our beloved Lost characters were aboard when it crashed on a
deserted and terrifyingly mysterious island.

The world of internet and pop culture phenomenon has never been as close as they are for the Lost: The Complete Fifth Season home
video release. With the five-disc Blu-ray Limited Edition Dharma Orientation Kit, Lost fans get a full on indoctrination into the Dharma Initiative as well as enough mystery enhancing plot points
to further send that raised eyebrow trying to figure out the Lost riddle higher.

The much talked about Lost University takes viewers on a journey as no other web-based television synergy has prior. Inside the Blu-ray Lost release is an inviting world set to further wet
the appetites of all Team Jack, Kate, Sawyer, Hurley or an army of other elusive Lost island characters.

SheKnows brings our readers an inside look into the long-anticipated release of the Lost fifth season’s DVD and Blu-ray.

Lost gets funny: a blooper clip!