Harry Potter and the Half-Blood Prince arrives on Blu-ray and a two-disc special edition DVD December 8 that takes Harry Potter fans behind-the-scenes for an exclusive look at The Wizarding World of Harry Potter. 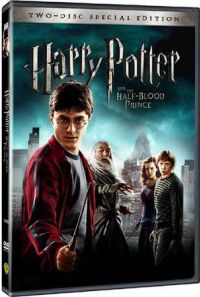 As audiences
enjoy the home video arrival of their favorite wizard, you can begin to dream about heading to the world of Harry Potter soon in Orlando, Florida. Opening in Spring 2010, the “magical land
based on the popular Harry Potter Books and films” opens at Universal Orlando in spring 2010.

But for now, in time for the holidays, the Harry Potter and the Half-Blood Prince DVD and Blu-ray are the perfect gift for anyone who treasures JK Rowling’s world.

In this next installment of the Harry Potter saga, Voldemort’s grasp upon both Muggle and Wizarding worlds intensifies. The young wizard’s beloved school, Hogwarts, is no
longer a respite from the world’s worries for its students — evil is coming.

Harry and his cohorts also tackle the effects of something they cannot control — puberty. David Yates effectively directs the latest Harry Potter and captures the torturous aspects of
early teenager years as impeccably as possible in a story about wizards!

Mr Potter discovers a new way of seeing Ginny Weasley and Lavender Brown immediately zeroes in on Ron Weasley. But what about Hermione? She is fiery with her opinion about Ron’s love life,
but is too proud to say.

Meanwhile, Dumbledore is preoccupied with readying Harry for his fateful confrontation with Voldemort.

Orlando, Florida will never be the same!

The Harry Potter kids tell all!

The Harry Potter and the Half-Blood Prince review

Bonnie Wright is Ginny Weasley and talks to SheKnows exclusively